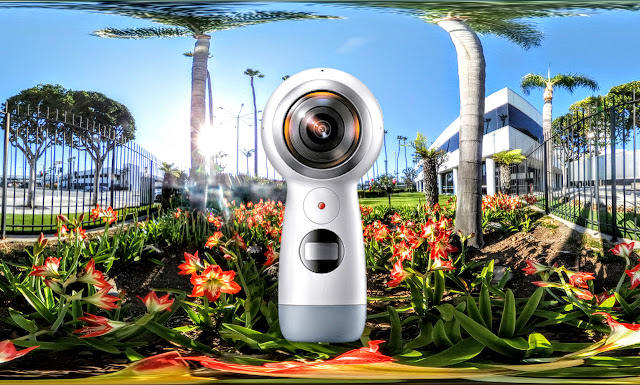 Here is the video.  Warning: it’s long and detailed!

Some additional notes:
Download the prerelease Gear 360 app here.
Sample photos here:
Sample video here:
New discoveries:
– Compatibility: The new Gear 360’s 4K video can be stitched on a Samsung S6 at full resolution.  (The original Gear 360 could only stitch at 4K on a Samsung S7.)  However, even with the new app, I could not stitch 4K videos from the original Gear 360.
– Stitching:  the new Gear 360’s photos can be stitched on a desktop with the ActionDirector software from the original Gear 360.  The benefit is that the stitch would be smoother compared to the app.  However, the ActionDirector software could not stitch videos from the 2017 Gear 360.
– Overheating:  At 73.5 F (around 23 C) indoors, I was able to record continuously at 4k for 29 minutes and 37 seconds.  I did not test recording at 2560 x 1280 resolution (Samsung claims 1 hour 30 mins recording time at 1280p).
– External power:  The Samsung Gear 360 can be plugged to a USB power source and still be able to record.   It appears that it will not use the battery while plugged in.  Before recording, I saw the battery at 95%. I plugged it in and saw a lightning bolt sign, indicating it was charging.   While it was charging, I could still record.  After 5 minutes of recording, the battery was still at 95%.  I conclude that when plugged in, it doesn’t use up the battery