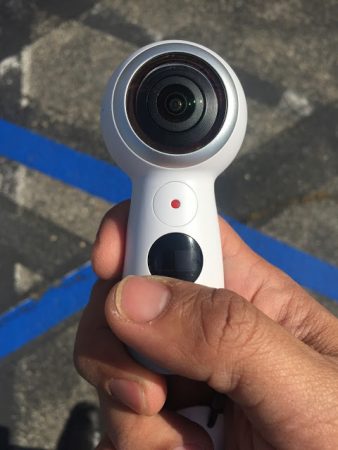 The 2017 Samsung Gear 360 has finally launched in the US for a remarkable $229!  And there’s a promo to get it for even less.  I also wanted to demonstrate the 2017 Gear 360’s image stabilization.
The 2017 Samsung Gear 360 is the most affordable 4k 360 camera.  It was launched about a month ago in Korea, Germany and a few other countries.  It is finally launching in the US.  Officially, the launch date is tomorrow, which is why it’s not yet on the Samsung US website (as of today May 25), but online retailers such as Amazon have already made the US version of the Gear 360 available.

Although the Gear 360 is the lowest cost 4K camera, it is actually a pretty good 360 camera for both 360 photos and videos, and it is compatible with more devices than its predecessor. Here are my impressions.

Lately, there has been a lot of buzz around stabilization – from gimbals such as the Guru 360, software such as Mettle Skybox, or more recently, gyro-based stabilization, as seen in the Insta360 Nano, Insta360 Air, Insta360 Pro, and Xiaomi Mi Sphere.   The latest camera to breathe the rarefied atmosphere of The Stabilization Club is the Garmin Virb 360.

What is not so commonly known is that the 2017 Gear 360 also has some image stabilization capability. It works only for pitch / tilt correction and only at slower speeds.  It will not correct for yaw or roll.  Here is a demo:

Note: to get the stabilization, you have to turn on the “Tilt Correction” option in the app, and the “correct wobbles” checkbox in the Gear 360 Action Director 2 software.  By default, they are off.  You should also turn off this option when using a gimbal.

Although the stabilization is limited, it’s still quite useful in actual practice.  Here is a sample 360 video where the tilt correction / image stabilization kept the camera level while I was swimming with it:

If you have a compatible Samsung phone (S6 or above), you can also consider getting the original Gear 360 which has been selling for under $200 lately.  Here is a comparison between the 2017 and 2016 Gear 360 and a list of their differences.

360 Camera Dual Mount for DJI Mavic captures 360 aerial videos without the Mavic in the shot
You can now preorder the Virb 360! 12 things to know before preordering
Comment