Rendering 4k video, whether 360-degrees or not, is incredibly processor-intensive.  For example, Samsung recommends these specs for editing 360 4k video:

At the time of this writing, a computer with specs like these is not cheap.  Videomaker’s recommended PC build for a 4k editing PC costs about $4,000 as of February 2016.

But what if you could get pretty fast rendering speeds for a fraction of the cost?

I was slogging through with my laptop (i5-2450M, 8GB RAM, Intel HD Graphics 3000), taking as long as 8 minutes to render just 15 seconds of 4k 360 video.  Then I met Hammad Iqbal on Facebook, who told me about a fast but very inexpensive PC.

In the tech world, “fast” and “inexpensive” are usually mutually exclusive and the figures he gave me sounded to good to be true, but I thought it was worth a shot.  I got a PC with very similar specs to the one he suggested, and here are the results:

Indeed it was true: an old Dell Precision T3500 workstation (circa 2009) with a Xeon processor could render 4k video at very fast speeds —  12x faster than my laptop, and on eBay these old workstations are selling for only about $250! 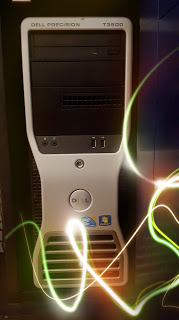 The one I got had these specs:

Just be aware that workstations have more limited compatibility compared to a regular desktop, and because this one is quite old, it may be hard to find the right drivers to work with Windows 10.  In fact, in my case, the desktop I got doesn’t have a Windows 10 driver for its graphics card, so I can’t stitch 360 photos or videos on Action Director.  I plan to buy a newer graphics card that has a Windows 10 driver, such as the GeForce GTX 750 Ti which is reportedly compatible with the T3500, or possibly the Radeon RX 480 if it is compatible, so that I can reuse it in the future when I want to upgrade to a VR-ready PC.

Thanks again to Hammad for this awesome tip!