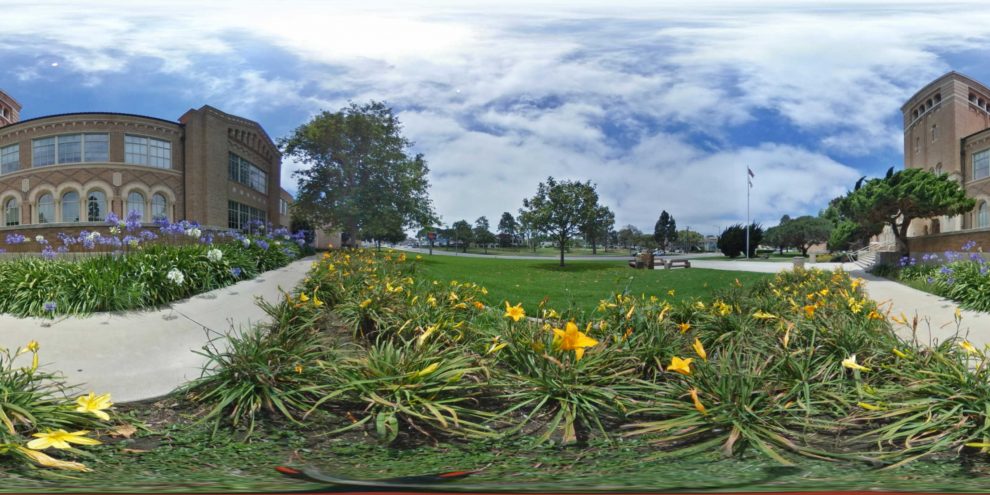 Before you begin, make sure your 360 photo or video is already in standard equirectangular format which looks like a rectangular image where the upper third and bottom third look distorted (see above).

Whether you have a single file with two circular fisheyes, or two separate fisheye files, you’ll need to stitch them with the software for your 360 camera.

If you edited your 360 photo or video, your editing software might not save the 360 file correctly to be recognized by other software as 360.  If that’s the case, you’ll need to reinsert the 360 metadata using either of these software:
(i)  For 360 photos, use Exif Fixer.
(ii) For 360 videos, use the Spatial Metadata Injector Tool.
With both programs, you simply select your edited 360 file to create a new version with the correct 360 metadata.

Facebook (free):  accepts both 360 photos and 360 videos.  VR headset viewing app available only on Oculus headsets (Oculus Rift, Gear VR, or Oculus Go).   360 videos can use the Guide feature for keyframing points of view.  However, note that embedded 360 photos and videos from Facebook will clearly show they are from Facebook.  Here’s a sample 360 video posted on Facebook (shot on Mi Sphere):

Kuula (freemium): 360 photos only.  Can add special effects such as filters and simulated flare.  Popular not just for 360 photos but also 360 graphics and illustrations.   Photos can be viewed on all headsets. Here’s a sample shot with the GoPro Fusion:

Veer (freemium): accepts both 360 photos and videos, and some other newer formats such as 3D 180.  Photos and videos can be viewed on all headsets.  They offer prizes to users from time to time, such as VR headsets or cameras. Here’s a sample:

Step 3.  Embed the 360 photo or video into your blog or website.

Next, get the embed code for the 360 photo or video and paste into your blog or website’s HTML.  To get the embed code, click on “Share,” where embed will usually be one of the options.   The big exception to this is Facebook, where you click on the three dots in the upper right corner of the post and select ’embed.’

Once you’ve copied the embed code, just paste it into the HTML for your blog or site.  That’s all there is to it!

For WordPress users, another alternative is to use a plugin called 360 photo sphere by Nathan Goodfellow.  This plugin can show a 360 photo in a simple way.  Here is where you can download the plugin.

360 Camera Technique: Shaving with a floating razor and how he did it with an Insta360 One X