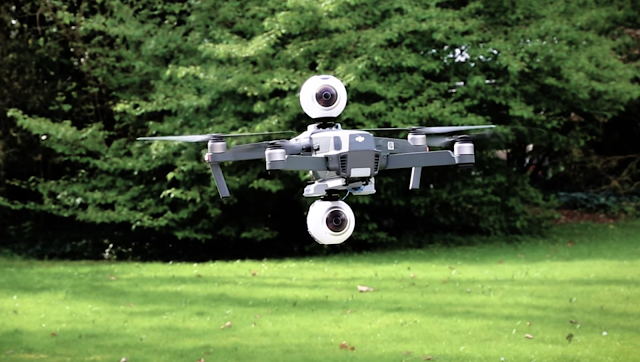 As reported in Cinema5D, videographer Jean-Marie Cannie created 3D printed mounts to attach 360 cameras and other equipment to a DJI Mavic Pro, including a configuration with two Samsung Gear 360 cameras, one above and one below, that enable the Mavic to be stitched out of the shot.

If you want to take aerial 360 videos without the drone in the shot, you can use the Kodak SP360 4K Aerial Kit for the 3DR Solo drone or a Gimbal Guard SP360 dual mount for the Mavic or Inspire.  Jean-Marie used the same concept to design mounts for the Samsung Gear 360 (or other cameras), which is more affordable than ever thanks to the low cost of the 2017 Samsung Gear 360, and the even lower cost of the 2016 Gear 360.

You can buy the 3D printed parts from Monsieur Cannie’s shapeways shop.  Notably, the bottom mount will not block the downward sensors of the Mavic, which are used to keep the Mavic stable.

Coincidentally, I just ordered a Mavic from Gearbest a few days ago.  I will definitely try this out!