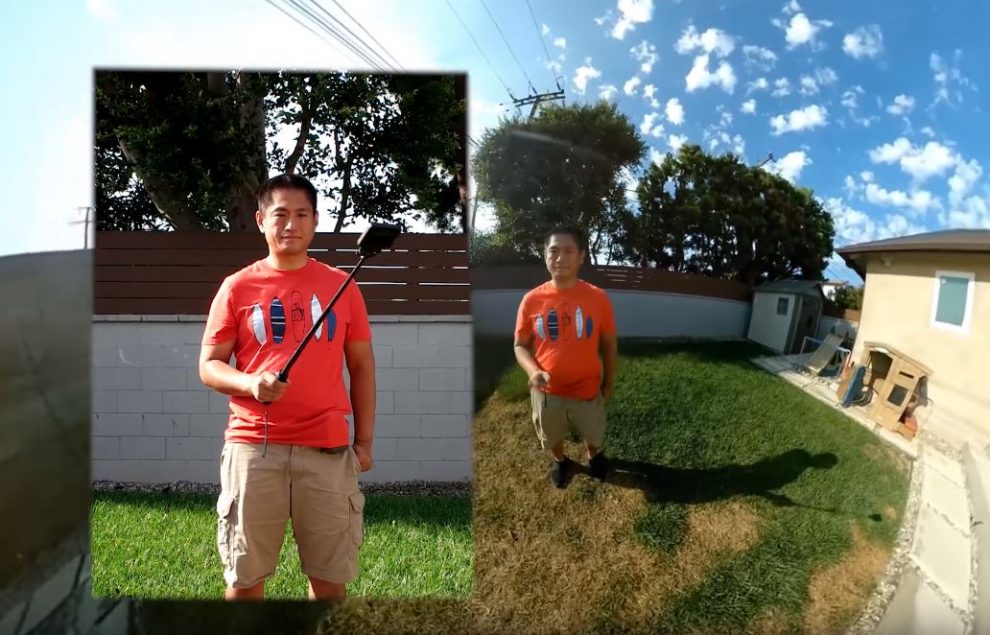 Step 1.  Use a selfie stick that fits between the lenses of your 360 camera

A 360 camera sees everything except the area between its lenses.  If you hold it with your hand or with a mini handle / mini tripod, your hands will show up prominently in the photo or video, which will make the camera’s presence obvious to your viewers.   Instead, the first step to making your 360 camera and selfie stick appear invisible is to get a selfie stick or monopod that is narrow enough to fit between the lenses of your 360 camera.

With thinner 360 cameras, you’ll need thinner selfie sticks (which can also work with thicker 360 cameras).  The one I use 90% of the time is the Benro MK10 (available here), a selfie stick tripod.  When you remove the ball head, it is thin enough to fit between the lens of even the slimmest 360 cameras such as the Ricoh Theta, the Xiaomi Mijia Mi Sphere and Madventure 360.  Here is a tutorial for removing the ballhead.

Step 2: Always align the selfie stick in-line with the camera

With a conventional camera, you need to point the camera toward your subject.  In contrast, a 360 camera captures everything around it, so you don’t have to point the camera at your subject.  In fact, if your 360 camera is stabilized, such as the Insta360 ONE, or Xiaomi Mi Sphere or Rylo, the camera can be tilted at any angle and the photo or video will still appear to be level and vertical.  In other words, rather than pointing the 360 camera like a conventional camera, use it like a microphone (i.e., it can be tilted at any angle) and bring it near your subject.   Tip: A good distance for people is around speaking distance, and a good height is around chin level.

How does this help with invisibility?  Most people aren’t familiar with 360 cameras, therefore they will expect the 360 camera to be supported directly below it.  When they look down and see nothing, it contributes to the illusion of invisibility.

On the other hand, if your 360 camera does not have built-in stabilization, then the same principle applies (bring it near your subject) but you must keep the camera vertical.  Alternatively, you can freely tilt the 360 camera and level the horizon during postprocessing with video stabilization software, or 360 photo editing tools.

Test your knowledge: solve the mystery!

If you have any questions, please let me know in the comments.  Now go out and take some photos and videos with your invisible 360 camera and please share this post!

TUTORIAL: Build your first virtual tour TODAY the FAST and EASY way with Kuula.co
How to send 360 photos on WhatsApp
Comment