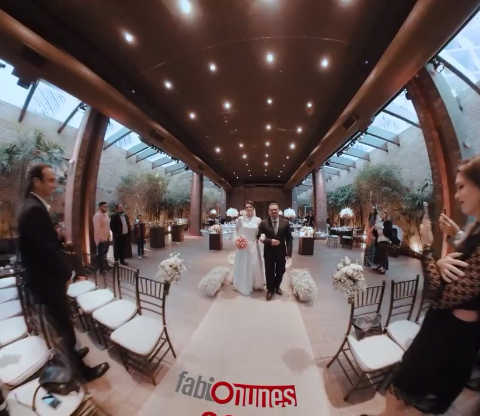 Every bride wants to have a special wedding entrance.  To make their wedding entrance unique, this couple chose to have it recorded in 360 but without a cameraman visible in the shot.   Here is the 360 video:

Here is the same video, in 360 overcapture style:

To pull off this shot, 360 videographer Fabio Nunes built his own dolly out of RC parts, complete with a guy wire for stability:

Fabio and his team described how they put together the dolly: “We used a structure of a “remote control cart” Revo, we made some modifications like putting a motor with higher torque and slower speed and integrate with a motor driver and a radio control receiver. In the structure of the cart we set a tripod to keep the 360 camera in the average height of a person. We have also added an fpv system (first person view) to control the 100% remote robot.”  They also used a brushed DC motor with reduction box.  “The motor controller was a 12A direct current driver.”

For his camera, Fabio chose the excellent GoPro Fusion (reviewed here).  Here is the BTS video:

Looks like the Fabio and his dolly did a pretty good job!  For more info about shooting this type of video, please contact Fabio Nunes.