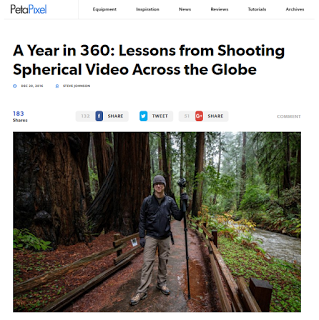 Check out this excellent article on Petapixel about 360 video techniques learned from a year of shooting 360 video around the world!

The article is by Steve Johnson, founder of Boundless, a DC-based studio.  Over the past year, Steve has been traveling to Iceland and Norway, and has been using 360 videos to document climate change.

Among other things, the article discusses:
– which cameras he uses and why (one of them is the Nikon Keymission 360);
– building a narrative;
– technical challenges of shooting 360 video such as lighting, stitching, and camera placement.

TECHNIQUE: How to hide yourself from your 360 camera
DEALS: Oculus Winter Sale!!! Huge sale on Samsung Gear VR and Oculus Rift software
Comment