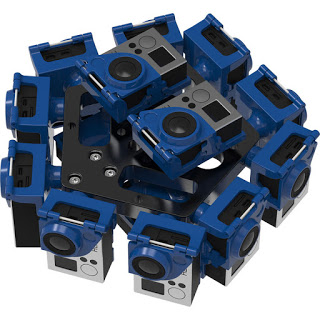 For professional image quality 360 video, a rig is still the way to go.  The 360Heros 3DPro is a 3D 360 rig that can capture fully spherical 3D 360 video that is stereoscopic in all directions, even the zenith and nadir.

The 3DPro converts to use either twelve or fourteen GoPro Hero 4 Black cameras.  With fourteen cameras, it has omnidirectional 3D.  With twelve cameras, the horizon is 3D in all directions, but the zenith and nadir are not stereoscopic.

To sync the cameras, the 3DPro relies on audio syncing.  It includes an audio sync clicker.

The 3DPro rig competes with rigs such as Google Jump / GoPro Odyssey, which also captures in 8k 3D 360.  Google Jump uses sixteen GoPro Hero 4 blacks and has no camera for the zenith or nadir.  It costs $15,000.

Similarly, the Facebook Surround also captures in 8k 3D 360 video, but has only a monoscopic zenith and nadir, and costs $30,000 for materials (doesn’t include the cost of labor for assembly).

The Nokia OZO is a compact self-contained 3D 360 camera that includes stitching software, but is monoscopic at the zenith and nadir and costs $45,000 (previously $60,000).