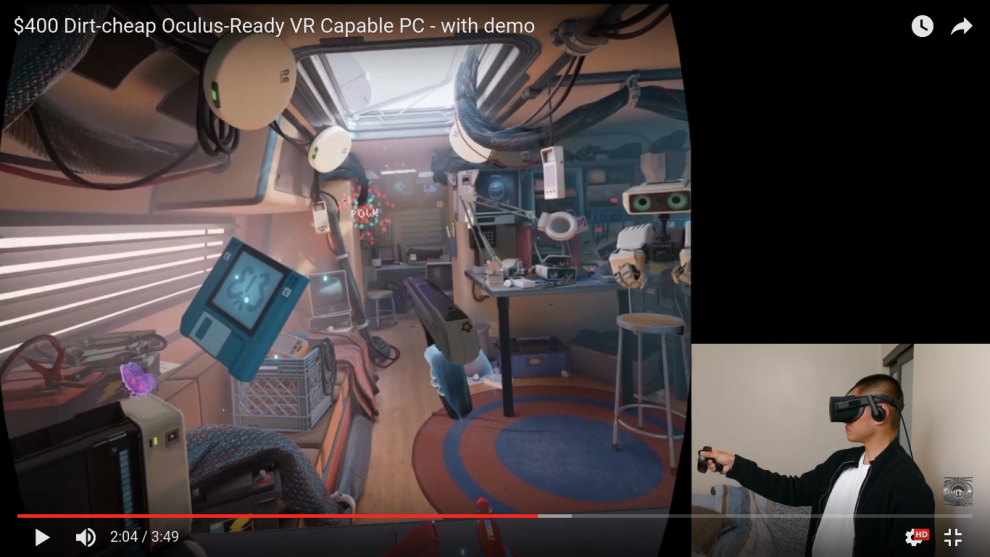 You can now get a VR-capable PC (almost VR-ready) for just $400 — the same price as a Sony PS4 Pro!  Here’s why you would want one, and how to put the system together.

In this post, I will discuss:
– why you would want to get a VR-ready PC
– which desktop VR system you should get
– how to put together a low-cost VR-capable PC
– a demo of the VR-capable PC showing its rendering speed and performance for VR.

WHY GET A VR-READY PC?

A VR-ready PC is useful for 360 enthusiasts for several reasons:
1. A VR-ready PC is faster at rendering 360 videos, and in some cases, in stitching 360 photos and videos as well.
2. A VR headset is the best way to enjoy 360 photos and videos.  Sure, you can use a VR window on your phone to swipe the screen and look around, or even hold it out and be able to move your phone to ‘look around’. But using a VR headset takes you to an entirely different level of immersion.
3. VR experiences and games are not only amazing and fun but can also give you ideas for composing your 360 photos and videos.

A VR-ready PC used to cost at least $1,000 or more, but the price of a VR-ready PC has gone down significantly, thanks to new, affordable entry-level VR-capable graphics cards from NVidia and AMD.  In addition, Oculus and to some extent Valve have implemented software that allows their systems to run on lower-spec machines.  Thanks to these developments, it is now possible get a desktop VR system (PC and headset) for just a little more than the cost of a PS4 Pro and Playstation VR.

WHICH DESKTOP VR SYSTEM SHOULD I GET?

As of 2017, there are three primary desktop VR systems: Playstation VR, HTC Vive, and Oculus Rift.  I like all of them, but if I had to choose only one right now, I would choose the Oculus Rift simply because it is a better value at the moment.

The Playstation VR (reviewed here) is theoretically the most affordable VR system, and it has the widest user base among desktop VR systems.  However, the tracking is limited to standing or seated experiences.  Second, there are currently very few games for it, and only a few are very good, plus the games in general tend to be a little pricier.

HTC Vive (reviewed here) and the Oculus Rift (reviewed here) are now quite similar.  Both systems can play each others’ games (although some older Rift games cannot be played on the Vive).  HTC Vive has the advantage of having better tracking (but not by much).  But Oculus Rift games tend to be a little more polished.  In addition, Oculus includes several games with the Rift, such as its killer app Robo Recall, Dead and Buried, Quill, Medium, and others.  The Vive includes some games as well that change from time to time but they are not as good as the games included with the Rift.  Finally, the Oculus Rift and Oculus Touch now have a total cost of $598, $201 less than the HTC Vive.  So, in my opinion, Oculus Rift provides better value than the HTC Vive.

HOW TO PUT TOGETHER A $400 VR-CAPABLE PC

First of all, I’m assuming you’re not a hardcore PC guy because if you were, then you wouldn’t even need to read this post.  Rather, this is for casual PC users like me.  For people like us who don’t build their own PCs, the simplest path is to start with a refurb PC.

You need a desktop PC with at least a 4th generation Intel i5 (Intel i5-4590 or better), at least 8GB RAM and Windows 10.  You should also make sure that it has an available PCI card slot for the graphics card.   As for USB ports, Oculus says you need USB 3.0 but I run mine on USB 2.0 without any problems (the headset and two sensors).  Only if you add an optional third sensor do you need a USB 3.0 port. 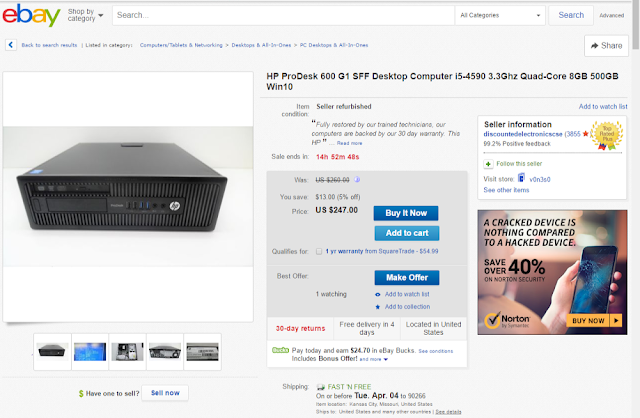 Next, you’ll need a graphics card.  For NVidia, the cheapest VR-ready card is the GTX 1050 Ti 4GB (I can’t guarantee the 2GB version is VR-capable).  If your desktop PC can only accommodate low profile graphics cards, the GTX 1050 Ti has a low-profile version that works, and it doesn’t need a power connector either!  For AMD, you can use the RX 470  (I don’t know if the RX 460 is VR-capable).  There is currently no low-profile RX 470 or even RX 460.

OK so a cheap system is not always a good system.  Does this system perform adequately?  First, I’ll show its video rendering speed compared to the i5-4590’s integrated graphics card (Intel HD Graphics 4600).  Then I’ll show its VR performance.


VR performance
First, I ran Valve’s VR readiness test, and the system had a score of 3.1 (Medium), with no frames below 90 fps, and only one frame (out of 9,617) that was CPU-bound.  Valve’s test categorized the system as ‘VR-capable,’ which means it can run VR games but does not meet the “recommended” specification.

Of course, the real test is the actual performance.  Here’s a demo of its performance with the Oculus Rift:

It felt very smooth.  I did not notice any judders, or lower resolution or any issues.  In fact, I noticed that there is no warning that says I don’t meet the minimum spec.  (On my primary VR PC, which has a Xeon processor and GTX 1060 6GB card, I get a warning that says I don’t meet the minimum specifications.)  I don’t have an HTC Vive anymore to test with, but based on the Valve VR readiness test, it should work well for almost all games (except a very few that are exceptionally demanding, such as the “Gnomes and Goblins” VR experience).

In summary, getting a desktop VR system is more affordable than ever before, and the total cost is approaching the cost of a PS4 with a Playstation VR (plus PS4 camera and controllers).  It is possible to build a VR-capable PC for $400 with a GTX 1050 Ti (under $150), and you can now get an Oculus Rift + Touch for under $600.  A VR-capable PC will help you render videos faster, enable you enjoy 360 photos and videos more immersively, and can help improve your sense of composition for 360 photos and videos.