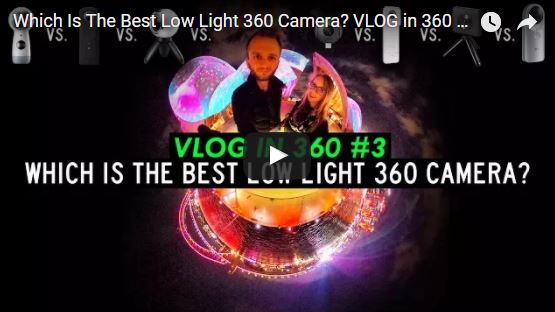 Ben Claremont (Life in 360) compares seven 360 cameras for their low light performance!  Which cameras came out on top?  The answer will surprise you!

Spoiler alert below!
.
.
.
.
.
In my own testing, I found similar results as Ben did, although I would have a different ranking for these same cameras.

For me, the Insta360 Air (reviewed here) and Insta360 Nano are pretty good for low light because even though they have quite a lot of noise, there seems to be more detail in the shadows in low light.  Check out this sample.

The Xiaomi Mijia MI SPHERE (reviewed here) did well because it uses Sony IMX206 sensors which are backside illuminated (BSI) CMOS sensors, which means the wiring for the sensors is behind the photodiodes, allowing more light to reach the photodiodes.   However, the contrast curve for the Xiaomi seems a bit aggressive, so it looks good with the highlights and midtones but the shadow areas in low light are almost totally clipped.  Here is a sample low light photo at a concert.

As for the Ricoh Theta S (or the more affordable Ricoh Theta SC with the same sensor), it did perform splendidly in low light in my tests as well.  Why is that?  My speculation is that all of these cameras have the same sensor size (1/2.3 inch) but the Theta has a lower resolution.  As a result the physical size of its pixels is larger than those of the other 360 cameras, allowing the pixels to collect more light.

OTHER OPTIONS
Two other cameras with BSI sensors but not tested here are the Kodak SP360 4K Dual Pro and the forthcoming Kodak Orbit360 4K. I don’t have the Orbit yet, but I will test the SP360 4K against some of these cameras next time.  I will also include the Nikon Keymission 360, which I think performs reasonably well in low light.

If you would like to buy any of these cameras, please use the affiliate links above to support 360 Rumors at no additional cost to you.  Thank you very much!