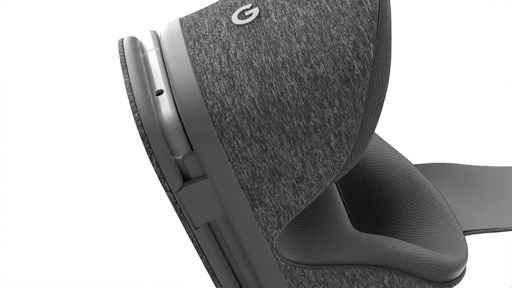 Today, Google officially launched Google Daydream, its premium mobile VR platform.  It’s available for $79 (includes both the headset and controller), or for free if you preorder the Pixel phone, the first Daydream-ready phone.  But before you go out and buy a Pixel phone, you might want to look at these factors which might mean that Daydream is not as good as Samsung Gear VR.

1. Resolution
The Pixel XL’s resolution is 2560 x 1440 but the smaller Pixel phone’s resolution is only 1920 x 1080.  That seems ok, except that with a VR headset, you’re effectively looking at a very close-up view of the screen.  It’s magnified so much that you can see the individual pixels (an issue called “screendoor effect” because it looks like you are viewing things through a screen door).  Some users already complain about it on the Samsung S6 and Samsung S7, both of which have a resolution of 2560 x 1440 (78% higher than the Pixel’s FHD resolution).  The Pixel’s lower resolution would make it even less detailed than the S6 and S7.  Moreover, the S8 will likely be announced late February or early March 2017, and it is expected to have a 4k resolution display, which would further widen the disparity in image quality between Daydream and Gear VR.
2. No focus adjustment
Unlike the Samsung Gear VR, the Daydream View has no focus adjustment wheel.   On the plus side, the Daydream View was made to accommodate glasses, so if you have corrective lenses you can use those.  But for other people who don’t normally wear glasses or contacts, they won’t be able to correct for minor nearsightedness or farsightedness.
3. Smaller lenses
The Daydream View has significantly smaller lenses compared to the 2016 Samsung Gear VR.  You can see the difference in the photos below. 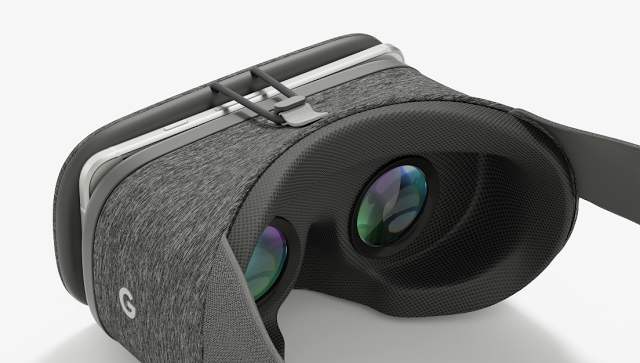 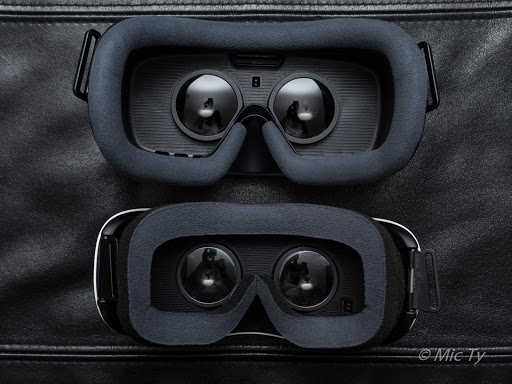 The Gear VR’s larger lenses mean that images will appear larger on the Gear VR than on the Daydream View.  It’s like the difference between a larger TV and a smaller one.
4. Alignment
The Samsung Gear VR’s position on the headset is fixed.  There are plastic guides on the Gear VR to ensure that your phone is inserted correctly.  With Daydream View, the placement of the phone on the headset is much less strict.  There are magnets on the Daydream View headset that the phone will detect so that it can realign the center of the image on the phone’s screen.  On one hand, this is more convenient than the Gear VR’s approach.  On the other hand, it also means that the Daydream View is not designed to use the entire phone screen, which means an even lower effective resolution.
5. Passive
The Samsung Gear VR is an active headset.  It has its own sensors that are more accurate than the sensors in the phone.  On the other hand, according to RoadtoVR, Daydream View is passive.  There is a passive NFC tag to let the phone know that it’s been inserted in the headset, and there are the aforementioned magnets so the phone can align the screen.  However, the Daydream View has no internal sensors and relies only on the phone’s own sensors.  In that sense, it is passive and somewhat similar to Google Cardboard (which is also passive).  Google Cardboard’s head tracking is much less accurate than that of the Samsung Gear VR.  With less accurate head tracking, Cardboard does not provide a persuasive illusion of immersion.  It remains to be seen whether Daydream’s head tracking is as good as that of the Samsung Gear VR.
6. Battery
Because Daydream View is entirely dependent on the phone for processing, it will be extremely processor-intensive and will likely drain the phone’s battery quickly.  The Samsung Gear VR is also processor-intensive although probably to a slightly lower extent because it has its own sensors but in any case, there is a pass-through USB port to allow you to use the Gear VR with a charger so that you won’t drain the phone’s battery.  It is not known whether you can charge the phone while using Daydream View.
7. Overheating
For similar reasons, Daydream View will likely cause the phone to heat up very quickly, and could be prone to overheating.  Again, the Gear VR is also processor-intensive, but Daydream is probably more so, because it is completely reliant on the phone’s processor.  Possibly compounding this issue is the fact that on Daydream View, the phone is covered on both sides, blocking it from radiating heat away.  On the Samsung Gear VR, the rear of the phone is exposed, which can allow the phone to cool down a bit.
8. App support
One of the advantages of Daydream is that it is supported by several manufacturers, which could mean a larger number of users.  However, there is a pretty steep obstacle to use Daydream, i.e., having a Daydream-ready phone.  The first official Daydream-ready phone is Google’s Pixel, which has a very high end processor – the Qualcomm Snapdragon 821, which is even faster than the Snapdragon 820 used in high-end phones such as the Samsung S7.  Pixel is a little expensive and starts at $649.  It is by no means certain that many people will upgrade to a Pixel or other Daydream-ready phone.  Meanwhile, right now, Samsung Gear VR is the third or fourth most popular VR platform for developers, and Google Daydream is still very low on that list.
[9.  Pass-through camera]
This is more of a theoretical advantage.  With the Gear VR, you can continue to use the smartphone’s camera.  Right now, it’s used as a pass-through camera if you want to look at the real world briefly without removing your headset.  However, it is also possible to use it for AR-like apps.  With Daydream, the phone’s camera is blocked by the front lid, which makes this type of application impossible.  However, to be fair, there are no apps on the Gear VR to my awareness that use the pass-through camera this way (except for the pass-through camera utility).
But check out the controller
Notwithstanding these issues, Daydream does have one clear advantage over the Gear VR, which is Daydream’s motion controller.  It makes possible a different and more engaging way of playing games or navigating through menus.  Until Samsung or Oculus develops a similar controller for Gear VR, the controller will be a competitive advantage for Daydream and may be enough to overcome the aforementioned issues.