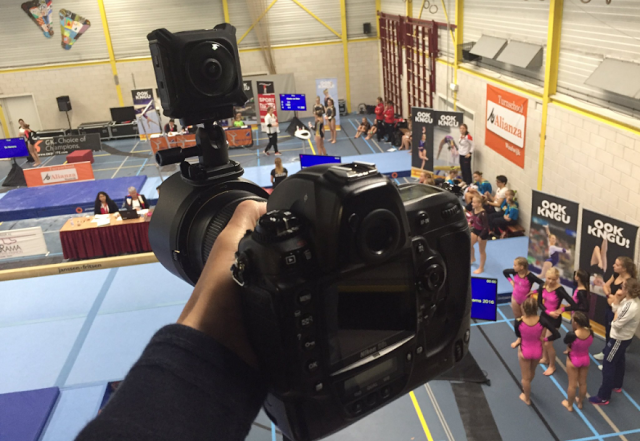 Here is a guest post by Marcello Geerts, a freelance photographer from the Netherlands who shoots for several local sports and lifestyle magazines. Marcello also has online workshops for adults and for kids, both in Dutch and English, including personal coaching via an eCommunity, where he takes viewers in the field to show how photography works. His current website is marcellogeerts.nl where you can see some of his work.

Early this year Nikon announced the KeyMission 360 as their first action cam. It took me a few weeks before I realized this could be great news. I started working on online photography workshops, including one for kids, using a Nikon D810 for recording the footage. But a 360 cam could give the user the ultimate eWorkshop experience, almost like really being out in the field with me.

Finally the KeyMission was released and I was able to purchase one on the first day of the release in the Netherlands.

My first serious test shoot was on Saturday 5 November, after shooting footage for the KidzBasiX eWorkshop. But when I returned home I was in for a shock. I reviewed the footage with the KeyMission 360/170 Utility and it was dark, soft and had a lot of artifacts clearly showing.

My next test was to load the 360 movie to YouTube using both iMovie and KeyMission Utility (save for YouTube). After the upload I could see that the quality of the movie exported by the KeyMission Utility was much better then the preview shown in the Utility.  And we all know that YouTube is doing compression too, so I cannot wait unttil Vimeo supports 360 videos. I think this will add to the quality as well.

And also the iMovie processed file was better then in the Utility. I cannot really see a difference between the Keymission Utility export and iMovie export on YouTube. But I think that the quality could be better. My experience is that you have a learning curve with each new camera (and even with each new lens on a DSLR).

So my first lesson for all KeyMission 360 owners is: DO NOT VIEW YOUR MOVIE WITH THE KEYMISSION UTILITY. I don’t understand the Nikon strategy, releasing software that shows their movies as really bad, although the actual quality is really good.

The second tip is exposure compensation. I am still working on how to fine tune this, but from all my Nikon experience (D70, D300, D3s and D810) I know that Nikon is in general preserving highlights (read: making the overall picture a little too dark). I think that you have to check each scene using you phone and carefully check the exposure of you main subject. And then adjust with exposure compensation accordingly. It could mean that you have to sacrifice the sun/sky/clouds to ensure you main subject is properly exposed.

The unedited movie in YouTube still looks too dark and some details are gone. So I made it brighter in iMovie and added some texts and a picture in picture to see how this works in 360 movies.

The second test was in a sporting facility. I mounted the KeyMission 360 to my lens and it is pretty good. I see that the sporting arena itself is very bright, but the exposure on my face is pretty good. And it is a cool standpoint ‘hovering’ above my lens.

I will continue learning and will keep you posted.

HTC Vive will be able to play Oculus Touch games via Revive
Nikon Keymission 360 image stabilization: does it work?
Comment