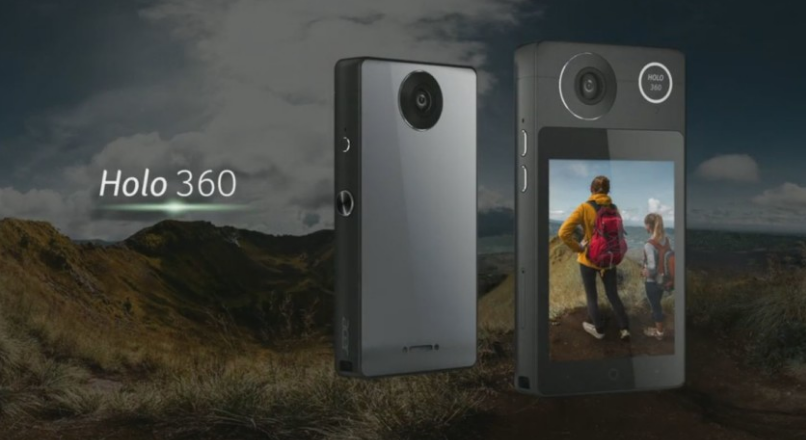 Acer announced the Holo 360, a hybrid device that is both a 360 camera and smartphone.

Just the other day, my friend Ben Claremont (Life in 360) and I were discussing about when 360 cameras would become truly popular, and Ben’s prediction was that phones would have built-in 360 cameras, which would make them grow in popularity.  In that regard, one of the fastest growing sub-categories of 360 cameras of the past year have been 360 cameras that attach to smartphones (such as the Insta360 Nano, Insta360 Air and Giroptic iO).  We also saw two smartphones from Protruly called Darling that had built-in 360 cameras.

Acer today made a surprise announcement of the Holo 360, a hybrid device that is a 360 camera but can also function as an Android smartphone.  The underlying premise is that you would be able to share your 360 photos and videos directly from the Holo 360 without connecting the camera to a phone or desktop.  Acer did not give other details (such as resolution, price or availability), but said that it would be compatible with LTE networks and would run on Android.

What is puzzling to me (besides the lack of detail or a press release for that matter) is what kind of need this device would fill.  If I have a 360 camera and I want to share my 360 photos and videos, it does seem useful to be able to do it directly without connecting to a smartphone, but does that mean I need to pay for a separate phone plan just for a 360 camera?  Or would I just have the Holo 360 as my only phone but would have to put up with its relatively simple features compared to conventional smartphones?  It seems the Holo 360 leaves many questions unanswered, and answers questions that nobody asked.

To me, it is more practical to use a 360 camera accessory (such as the aforementioned Nano, Air or iO), which are easy to connect to a smartphone to share my photos or videos.  I personally like the Nano’s approach which allows me to use it independently or attached to my smartphone as needed, which is why I think 360 camera accessories have a bright outlook and IMHO offer the most likely way for 360 cameras to become very popular.

Meanwhile, I’m open-minded about the possibilities of devices such as the Holo 360.  How about you?  Do you like the concept of the Holo 360?  Let me know in the comments!

Thank you very much to tech blogger Mike Cane (Atomic Supermen blog) and Upton North of 360lookaround.me for bringing this to my attention!