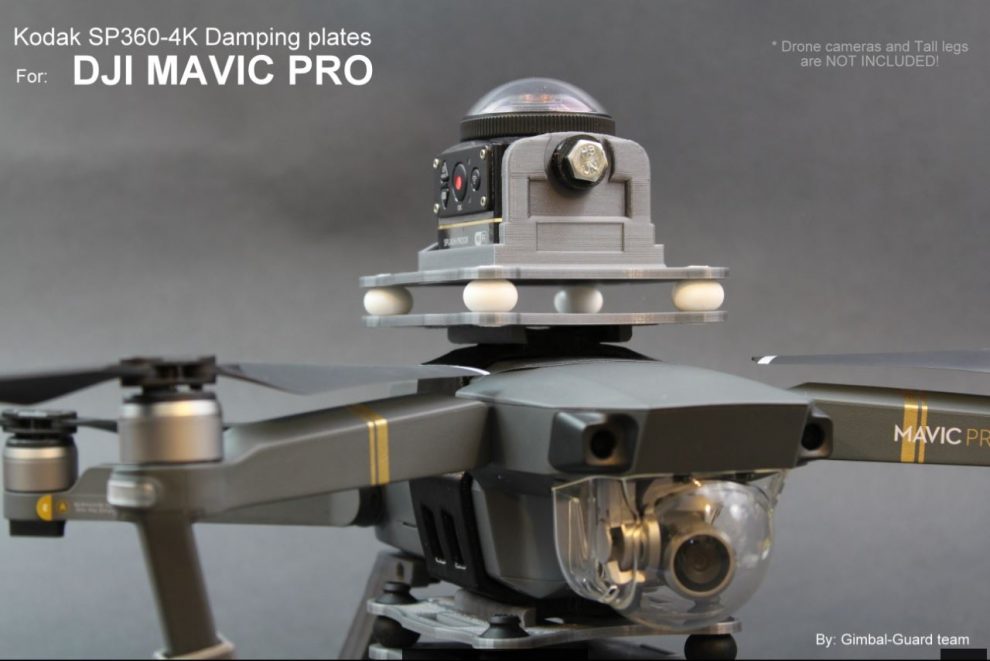 Here are brackets for attaching the Kodak SP360 4k Dual Pro to a DJI Mavic Pro or a DJI Inspire-1 for capturing aerial 360 videos without the drone in the shot.

BACKGROUND
Aerial 360 videos are beautiful to watch but they create several challenges.  One of them is finding a way to attach a 360 camera to the drone.  Second, you’ll need to find a way to avoid having the landing skids appear too prominently in the video.  Third, if you address the second issue by suspending the 360 camera far below the drone, you’ll need to find a way to keep the horizon as level as possible for viewer comfort.  Fourth, you’ll need to deal with the drone being in the shot.  These issues are in addition to dealing with your drone’s performance limits.

One possibility is to suspend a 360 camera (or a 360 rig) below the drone using a stabilized 3-axis gimbal.  Aerial gimbals for this purpose are usually not cheap, such as the NS VR gimbal, Wenpod Tarzan-A, or the TG20 stabilized rig that each cost around $2,000.  They also tend to be heavy, requiring larger and more expensive drones.  Finally, you would still need to remove the drone from the shot in postprocessing.

Another possibility is to attach a 360 rig around the drone.  That’s the approach taken by Kodak with the Aerial Kit for the Kodak SP360 4k Dual Pro, which allows you to mount one SP360 4k on top, and another below, a 3DR Solo drone.  This approach addresses all four issues – most importantly, hiding the drone from the shot.

However, with the SP360 attached to the 3DR Solo, you won’t be able to see what the drone sees. Many users don’t want to fly blind or simply want to use the SP360 4k Dual Pro with a newer or more powerful drone.  Gimbal-Guard has the answer.

Gimbal-Guard is a company that makes protective covers for gimbals on various popular drones.  They have also made brackets that enable you to attach the SP360 4k to a DJI Mavic Pro, or a DJI Inspire-1, similar to the way Kodak’s Aerial Pack enables you to mount the SP360 4k Dual Pro on the 3DR Solo.  The critical difference is that you can continue to use the drone’s own camera.

One 360 videographer who has used the Gimbal-Guard on the Mavic Pro is Kevin Kunze, who has extensive experience using the Kodak SP360 4k and has been working with Kodak on several projects.  Here is a video by Kevin Kunze:

The trick to hand-catching a drone is that you’re not literally catching the drone as it descends.  Rather, you allow the drone to hover above eye level and then you carefully approach the drone, and grasp one of legs firmly.  While holding on to the legs and with the drone hovering, you then power down with the other hand.

Launching a drone by hand is tougher than hand catching it.  The hard part is that you have to hold the drone level as it powers up.  But with practice, you can do it.  Alternatively, you can place the drone between two supports that are tall enough to keep the lens off the ground.

You can buy the SP360 4k Dual Pro and the DJI Mavic Pro from Amazon or B&H Photo.  The Gimbal-Guard brackets are available from Gimbal-Guard:

You could also opt for the 3DR Solo with the Kodak Aerial Pack instead (the 3DR costs significantly less than the Mavic Pro, but you won’t be able to see the drone’s point of view while flying):

3. Kodak bracket by itself (if you already have the Dual Pro or if you want to purchase separately).

Do you have ideas of how you would use aerial 360 videos, such as for weddings or for that once-in-a-lifetime trip?  Share your thoughts in the comments!

Thank you very much to Jorge Arrieta for bringing this to my attention!