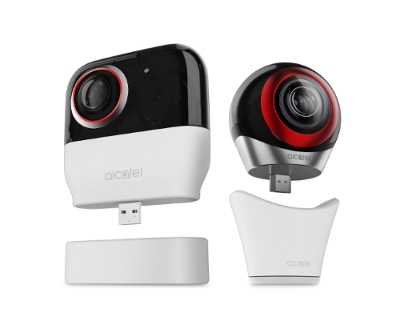 ALCATEL 360
Alcatel’s 360 cameras are called the Alcatel 360.  Both are fully spherical with two 210-degree fisheye lenses, and both are designed to be plugged into a phone’s USB port.  The resolution is 2k.  Not sure if that means photo or video or both.  One of the cameras has a spherical shape and the other has a rectangular shape, but they have the same specs.  The cameras rely on the USB for power and don’t have their own battery.  However, they can be used apart from a phone with a USB extension cable.
It is not yet clear whether they will function with Alcatel phones only, or with any phone with a Micro USB port.
The Alcatel 360 cameras will supposedly be sold for $99 to $109.  Not sure if that price requires the purchase of an Alcatel phone, but if it’s literally true, it would make them the most affordable fully spherical 360 cameras at the moment.
The spherical variant looks somewhat similar to the NeoEye and the Insta360 Air, and they compete indirectly with the Insta360 Nano for iPhone. 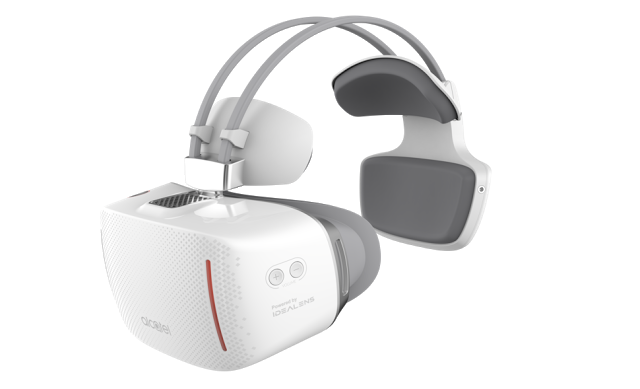 Alcatel also announced a standalone mobile VR headset, i.e., you don’t need to insert a phone in it. It seems that it doesn’t need to be connected to a computer either.  According to CNET, the headset will be 499 to 599 Euros.  No word on its capabilities but there was no mention of positional tracking.