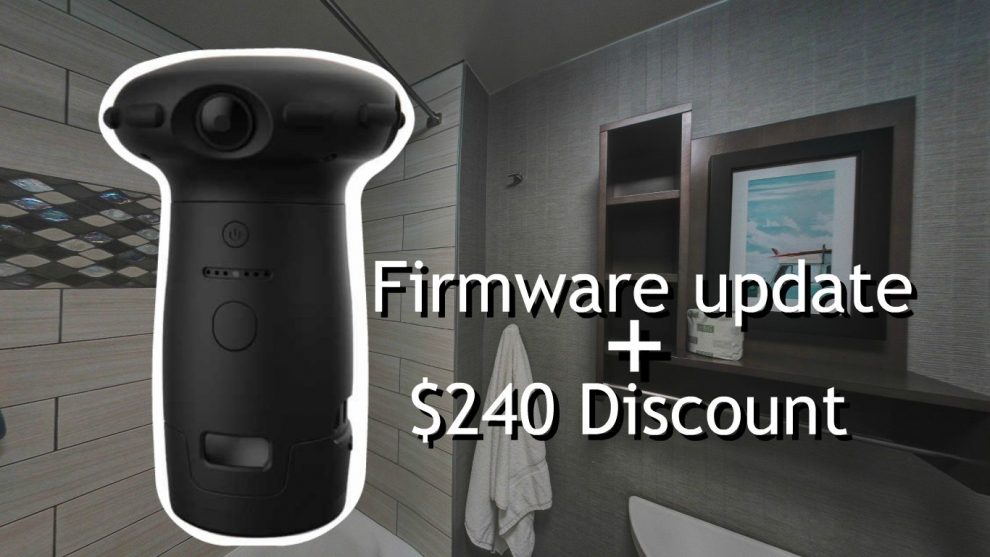 Ultracker Aleta S2C (reviewed here) is rapidly becoming the 360 camera of choice for virtual tours, with constant improvements to its image quality.  The latest update is firmware 1.04 which improves the stitching and enables a slower shutter speed for night HDR mode.

To test the new stitching mode, I shot in a small space — in this case a typical sized bathroom in a hotel.  Here’s a bathroom shot with firmware 1.03 (shot in HDR mode and processed with Photomatix):

Until now, there had been a tendency for the nadir to appear distorted.  The new firmware corrects the distortion:

Note that the toilet bowl in the issue has a slight stitching error, but that is because it was closer to the camera than the minimum distance of around 3 feet.

For this shot, I used the Bushman Monopod (reviewed here).  Its small footprint makes it easier to patch the nadir.

I also saw that the LED banding is gone, but I don’t know if it just so happened to be the right shutter speed to avoid banding, or if there was some other change that somehow avoids LED banding in any situation:

You can learn more about the Aleta here, including how to update the firmware.

For a limited time, you can get a $242 discount (20% discount) on the Aleta.  Just use this link and during checkout, use the code 29R8EDJT (while supplies last).  Thanks for supporting 360 Rumors at no additional cost to you, so that I can do more tests and reviews!