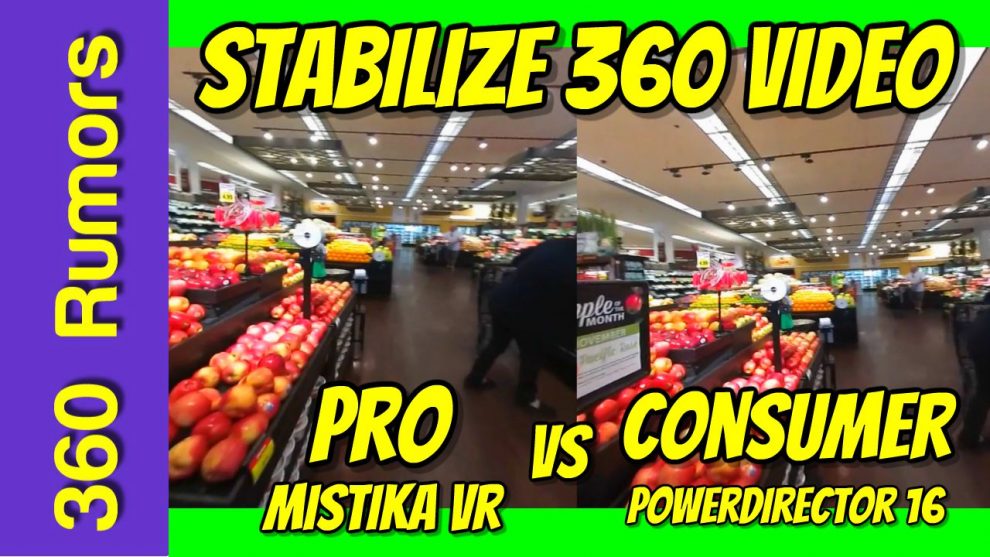 360 videos need to be stabilized to ensure viewer comfort.  Some 360 cameras have a built-in gyro to level the horizon automatically.  However there are still many 360 cameras that don’t have stabilization and sometimes the built-in stabilization is not good enough.  For those situations, you can use a gimbal such as the Guru 360.  However, sometimes using a gimbal is not possible or practical such as when mounting the camera on a dog for example (but I’m getting ahead of myself).

Another way to stabilize 360 videos is with software.  However, until recently, 360 stabilization software have been expensive, hard to use, and very time consuming.  Check out my After Effects stabilization tutorial.  Fortunately, there are now better alternatives available.   One is Cyberlink Powerdirector 16 Ultra, an affordable consumer 360 video editor that is also surprisingly effective.

Another is Mistika VR, a professional optical flow stitching program that also has a stabilization function.  I had a chance to work with one of its developers to help them do tests to improve the stabilization, and got to beta test the new front-facing algorithm.

You can check out how these options compare and how to use them both in this video:


BTW did you see the clock on my computer (for the tutorial screens)?  That’s how hard I’m working for you guys!  (Translation: pleeeeaase hit the like button! thank you very much)

To summarize, both Powerdirector 16 and Mistika VR are easy to use for stabilization and they’re both effective at stabilizing 360 videos.  Cyberlink Powerdirector 16 Ultra is super affordable while Mistika VR requires a subscription but is more stable than PowerDirector 16.   Meanwhile, if you want a stabilized camera, check out some of the best options:
– GoPro Fusion $699.
– Garmin Virb 360 $699 (Amazon)
– Rylo ($499 on Amazon or $75 discount direct from Rylo for US addresses only)
– Yi 360 VR $399 (Amazon)
– MADV Madventure 360 $309 (Amazon)
– Insta360 ONE around $299 (Amazon or Gearbest)
– Xiaomi Mijia Mi Sphere around $250 (Amazon or Gearbest).

$100 discount on GoPro Hero5 and Hero6! How to use GoPro for awesome 360 photos
360 video shooting tips from award-winning filmmaker Faith Granger
Comment