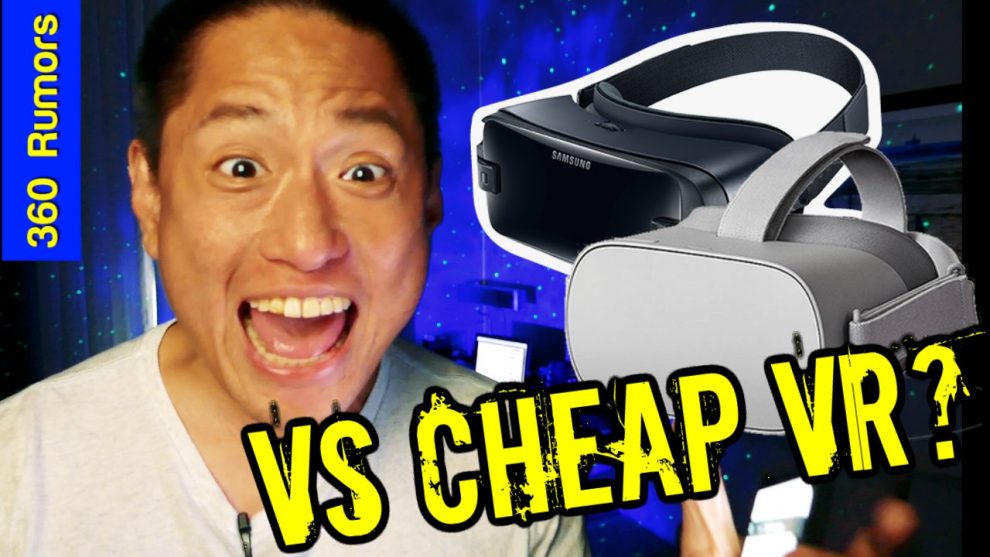 If you are looking for the best mobile VR headset but don’t want to spend more than necessary, then this post is for you.  In this article and video, we will be comparing the Oculus Go, Samsung Gear VR, and a cheap VR headset (a Google Cardboard headset).

With an increasing number of shooters interested in VR180 / 3D 180 cameras, shooters and their audience will need a VR headset.  But do you really need to spend hundreds of dollars on a VR headset?  What is the difference between a cheap VR headset, and a Samsung Gear VR or Oculus Go?  What’s the cheapest decent VR headset?

Here are my recommendations for best VR headset, in order of preference:

1. Oculus Quest
2. If you have a Samsung S8 or better: Samsung Gear VR
3. For any other phone: Oculus Go
4. Google Daydream
5. Google Cardboard

Here are the reasons for my recommendations:

What is the difference between Samsung Gear VR and a cheap VR headset?

There are a wide variety of Google Cardboard VR headsets, and some of them look similar to the Gear VR.  Indeed, there are a few that have arguably better optics or better ergonomics than Samsung Gear VR.  However, the one common characteristic of all Google Cardboard VR headsets is that they are passive devices that rely on the smartphone for tracking head movement.

Samsung Gear VR on the other hand, was optimized for VR in several ways.  First, to improve head tracking accuracy, Gear VR has its own sensors, i.e., inertial measurement unit (IMU).  Second, when a Samsung phone is inserted into the Gear VR, the phone configures itself to prioritize VR processing.  Third, Gear VR uses asynchronous timewarp and a sub-20ms motion-to-photon latency to provide a smooth display that makes the VR effect more convincing.

All of these differences mean that the Gear VR can track head movement far more accurately, thus creating a more convincing illusion of virtual reality. With a Gear VR, it is as though the objects that you see in the headset stay in place regardless of how you move your head, thus making them appear to exist independently from the headset.  With a cheap VR headset, ghosting, lag, distortion and other issues mean that your mind is fully aware that the images are from within the headset.

Which is better: Oculus Go or Samsung Gear VR or Google Daydream?

Oculus Go is a standalone VR headset that has access to the same library as Gear VR.  Oculus Go, Gear VR, and Daydream are all capable of tracking head movements accurately.  The difference between them is in features.  Because Oculus Go is a standalone device, it is very convenient to use right away.  It also has much less distortion compared to the 2017 Gear VR.   Its disadvantage compared to the Gear VR is that the processor is a Snapdragon 821, which is not sufficient for 8K 3D 360 videos.

Daydream’s advantage over Gear VR is that it is easier to insert the phone into the VR headset.  Special RFID tags allow the VR display to be centered automatically (via software).  However, Daydream’s library and user base are  much smaller than those of Oculus / Gear VR.

Should you buy an Oculus Go?  What about Oculus Quest?

Another advantage is that the Quest uses Snapdragon 835, which is the same processor on the Samsung S8 series.  This means that it will likely be capable of 8K 3D 360 playback using Insta360 Moment.

Based on these advantages, Oculus Quest is clearly the best mobile VR headset, combining the advantages of the Oculus Go and the Gear VR.