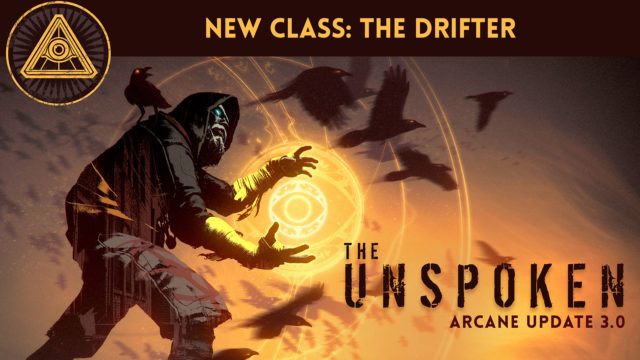 The Unspoken, a spellcasting combat game (Oculus Rift; HTC Vive via Revive) gets a major update that adds a new class, a new artifact, and several improvements.

The Unspoken is one of my favorite VR games.  It’s a spellcasting PvP game that not only has amazing graphics, but also has excellent gameplay that offers rewards for strategy and techniques, not just quick reflexes. Insomniac Games posted a major update that made several changes, including a new class, a new artifact and several improvements.

The new artifact is called a Burner and looks like an early 90s cellphone.  To use it, you have to dial magical symbols that show up.  That sounds hard to do in the middle of a battle but this artifact is very powerful.  When you dial the number, it will summon an ally to fight on your side.  (It sounds overpowered to me.  But we’ll see.)

The new class is the Drifter, which will appeal to players who love strategy.  The Drifter’s special skill is that he can see where the opponent’s next ember will spawn, allowing you to destroy it quickly.  His other skill is to create false embers that will damage the opponent if they teleport to it.  Finally, the Drifter has a unique force field that will travel with him wherever he teleports (unlike the other shields that stay in one place).  This class seems almost too powerful but again, I’ll wait to see it in actual gameplay.

Here is the video of the new Drifter class and the Burner artifact:

Other improvements to the game include a reworked shield.  Now shields will not degrade over time.  They will only degrade when damaged by an attack.  In addition, if you block with the center of the shield, it will not degrade, and the attack will be reflected back to the enemy.

There are also improvements to help you learn the game.  First, there’s a new training mode, accessible from the curio cabinet.  Second, while you’re waiting to be matched up, techniques will appear, giving you an incentive for patience.

This update is huge and I can’t wait to try it!