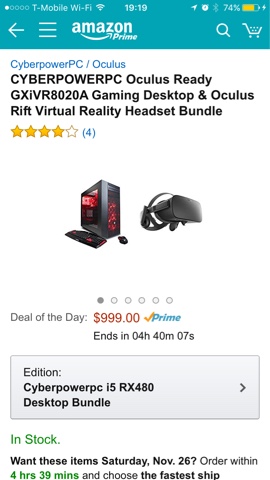 Amazon is offering an exceptional deal on an Oculus Rift bundle: a VR-ready PC with an Oculus Rift for just $999! But the deal is only until tonight at midnight (PST) on Thanksgiving Day.  Here is the deal:

The Cyberpower-built PC meets the minimum specs for a VR-ready PC with an i5-6402P quad-core processor, 8GB of RAM, and an AMD Radeon RX 480 (4GB) graphics card. It also has a 1TB HDD, six USB 3.0 and four USB 2.0 ports (more than enough for the Rift, Touch and even extra sensors). Oculus’exclusive asynchronous spacewarp (ASW) technology ensures that even with a relatively modest setup, you will gwt smooth framerates with the Rift.
Normally, the PC by itself sells for $700 and the Rift sells for $600. The special bundle price saves $300. 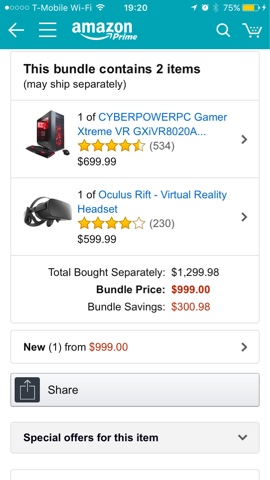