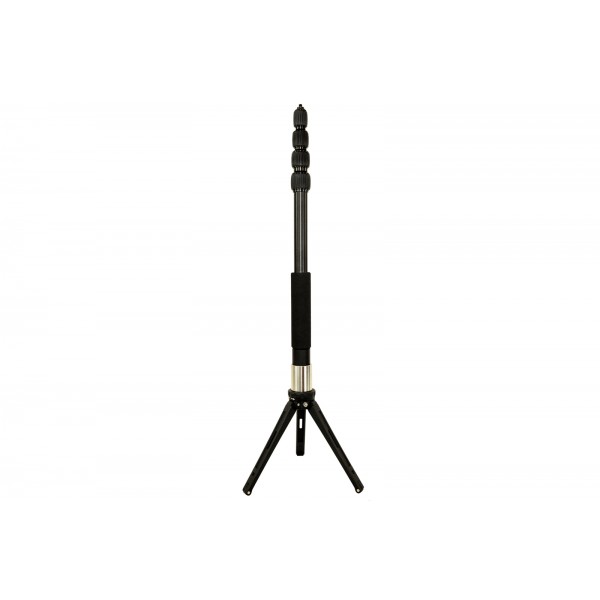 The next version of the Bushman Monopod (reviewed here), aka “the Claremont” is getting an update.  Here’s what’s different, and how to preorder it.

The Bushman Monopod is one of the best monopods for 360 cameras.  It is not only long (65 inches fully extended) and sturdy, but is also narrow and has a compact base that won’t occupy too much of the nadir.

The new version has three improvements:

– More stable: they increased the counterweight to 400 grams.  The previous version had a 240 gram counterweight.

– Improved tripod base: the new tripod has two positions – a flat position and an elevated position, which will occupy even less of the nadir.

The Bushman is a very good choice for interior photos.  It is tall and almost invisible, thanks to its thin profile and compact base.  I also like the fact that you can rotate the camera position by rotating the final segment, without having to move the tripod itself.

However, there are three issues with the Bushman you need to be aware of.  First, when using it outdoors, you need to be sure there is no wind, because it can be toppled by a strong breeze even with a counterweight.  The second issue is that it is not as easy to use on inclines because even though the legs are individually adjustable, the legs have only two positions.  The biggest issue is the cost – it is a bit pricey compared to some monopods.

You can preorder the Bushman here with a 14% discount (EUR110 instead of EUR127).  For a more affordable option, you may also be interested in the Qubo tripod legs for the Insta360 invisible selfie stick.