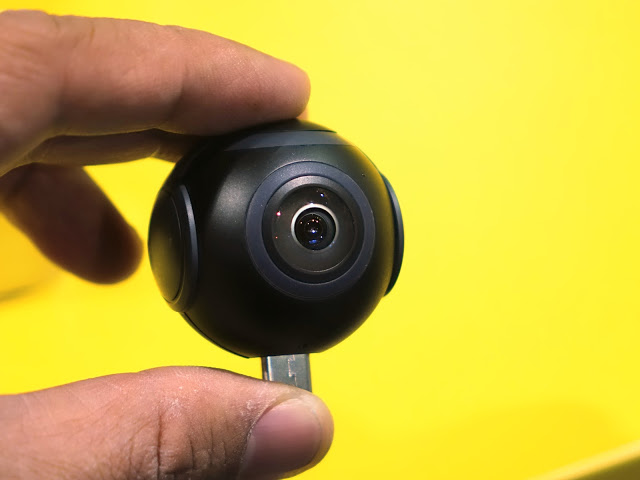 Update: check out the sample video from the Insta360 Air!

These days, more people are aware of 360 cameras, but 360 cameras are still relatively uncommon.  Insta360’s philosophy is to start with a device that people are very familiar with — a smartphone — and enable it to capture 360 photos and videos through an accessory.  This strategy was genius and it has worked very well with the Insta360 Nano for iPhone.  Now, Insta360 has created a 360 camera for Android as well.

Unlike the Nano, the Air is not intended to operate independently and must be attached to a phone when being used.  The benefit of this design is that it does not require a battery, which makes it more compact and decreases the cost to almost half of the Nano (itself already one of the most affordable 360 cameras).

The Insta360 Air is tiny — about the size of a ping pong ball.  It looks very well made.  It comes with a soft rubber case that protects the Air when not in use. 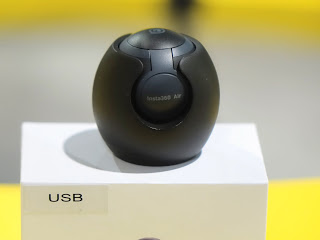 I tried taking some videos with the Insta360 Air and it was as simple as shooting with the Nano.  There is a 360-degree live preview with a high refresh rate and minimal lag, and there’s an option to apply filters or to change simple settings like exposure compensation.  But in addition to switching between photos and videos, you can also switch to a livestream.  On the Nano, using the livestream required going through the menus.

Another difference from the Nano is that the Air has a horizon correction function that allows you to level the horizon simply by swiping the screen, which I thought was a very cool and useful feature.
Here is a video showing the Air being used as a live webcam, and the app’s horizon correction:

Here is a full-size version of the video.

However, when I tried to rotate the Air, the video did not seem to be stabilized.  According to the representatives I spoke with, this feature is not yet ready but will be included on release.

Insta360 Air is scheduled for release in March 2017.  I’ve ordered it and will be posting a review as soon as I receive it.  I’m looking forward to it!  Update: check out the sample video from the Insta360 Air!