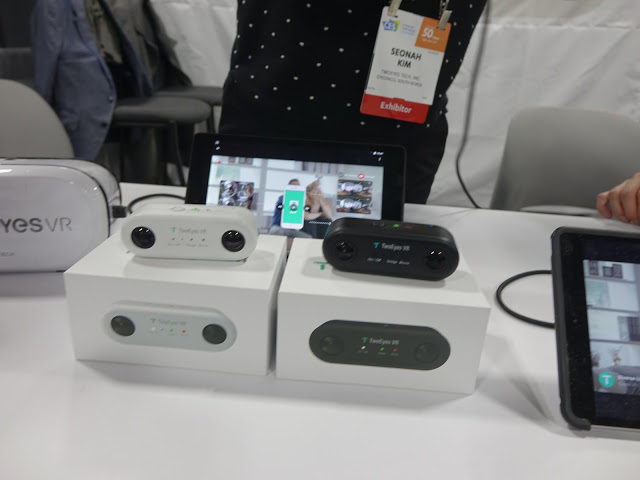 TwoEyesVR is a compact 3D 360 camera, which I posted about back in August.  I saw the camera in person at CES.

Here is a video showing how the app is used:
The reps showed me a 3D 360 video sample from TwoEyesVR and it was indeed stereoscopic 360, in 4k.  As expected, the stereo effect is at its maximum directly in front of and behind the camera, and diminishes when looking at around 90 degrees and 270 degrees (i.e. near the stitch line).
Here is an actual sample 3D 360 video from TwoEyesVR (to view it in 3D, you need to use a smartphone and then switch to Cardboard view):
The video can also be converted into non-360 3D side-by-side format:
The video seems to show the light to be flickering a bit.  At the show floor, I didn’t notice any such flickering.  I will inquire with TwoEyes about why there’s flickering and how it can be fixed.
According to the representatives I spoke with, TwoEyesVR would be $399 and will soon be available in Kickstarter.  I think that’s a pretty good price for a 4k 360 camera, not much higher than the cost of a Ricoh Theta S which is only 1080p and is not 3D.  Indeed, it would be the most affordable 3D 360 camera at that price.  However, I saw a preview of their Kickstarter page which seemed to show a price between $199 to $239.  I’m not sure if that’s an error, but if it’s true that would make it very affordable as a 360 camera, and with 3D and 4k video, it would be a fantastic deal!  Here is their official website.