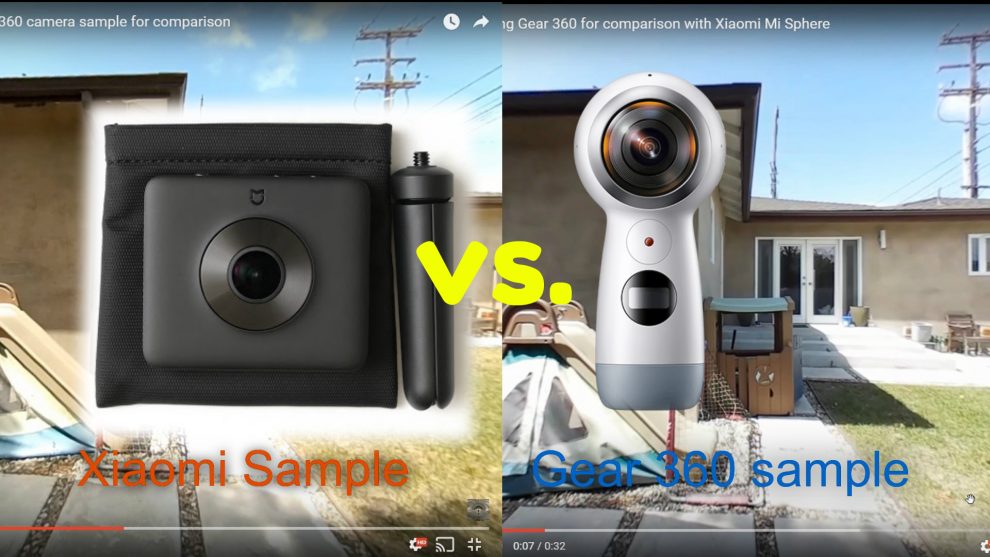 All the attention right now is on the 2017 Samsung Gear 360, but there’s a less known 360 camera that may actually be better, for about the same price — the Xiaomi Mi Sphere 360 camera.  In this post, I compare photos and videos from the two cameras, as well as describe the workflow for the Xiaomi to help you decide if the Xiaomi is better for your needs.

UPDATE: Here is a full review of the Xiaomi, with updated features, including stabilization.

Here is a video comparing the two cameras:


PHOTOS
Here are sample photos from the Xiaomi, including a comparison photo with the 2017 Gear 360.


Here are my observations:
1.  The Xiaomi has much more detail.  This is not surprising because the Xiaomi’s photo resolution is significantly higher (6912 x 3456) compared to the Gear 360 (5472 x 2736).
2.  In shadow areas, the Xiaomi has an even bigger advantage.  The Xiaomi retains detail in shadow areas, whereas the Gear 360 has much less detail in the shadows.  The Gear 360 also has much more noticeable chroma noise in shadows.
3.  The Xiaomi has almost edge to edge sharpness, losing sharpness only very close to the stitch line.  The 2017 Gear 360 is noticably less sharp over a wider area near the stitch line.
4.  Both have good stitching, although the Xiaomi is prone to slight doubling, while the Gear 360 is prone to slight smearing.
5.  Both have purple fringing, although it’s much more noticeable with the Xiaomi.

Overall, I would say the Xiaomi has noticeably better photo quality than the 2017 Gear 360.  Furthermore, the Xiaomi has manual exposure control.  You can also use ISO priority by specifying the ISO and then leaving the shutter speed on Auto, or vice-versa to use shutter priority.  Finally, the Xiaomi’s shutter speed is as slow as 32 seconds, which should be sufficient for night sky photos.

VIDEOS
Now let’s compare videos.  Nominally, the 2017 Gear 360 has higher video resolution (4096 x 2048 @ 24fps) versus the Xiaomi which has a video of 3456 x 1728 @ 30 fps. However, as you’ll see specifications are no substitute for a real-world comparison.  Here are sample videos as part of a playlist so you can switch between them using the playlist menu, or with the chapter search buttons:


Observations:
1. Surprisingly, even though the Gear 360 has a higher nominal resolution, the Xiaomi has at least the same level of detail as the 2017 Gear 360, and it might even seem slightly sharper. 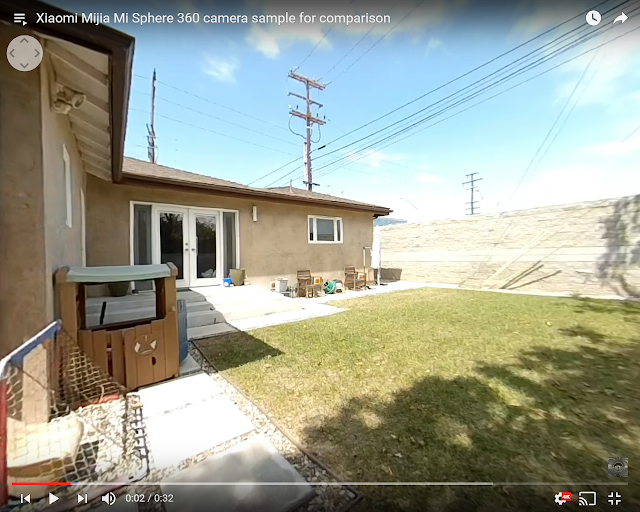 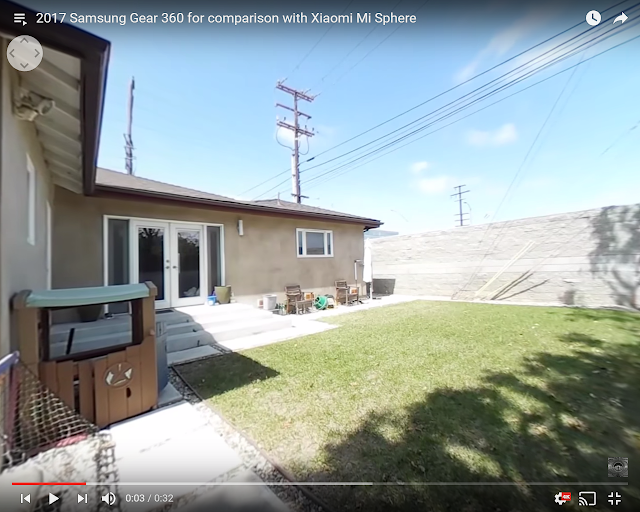 2.  For shadow areas, the Xiaomi has far more detail than the Gear 360, again notwithstanding the Gear 360’s higher nominal resolution.

3. The stitching for video looks smoother for both cameras, although the Gear 360 has some warping whenever something crosses the stitch line near the camera.


VIEWING AND SHARING PHOTOS
Viewing and sharing photos on the Xiaomi is straightforward.  Photos are unstitched in the memory card, then stitched in the app.  There’s an app for both iOS and Android.  When you view the photos in the app, the app stitches them and downloads them to your phone at the same time.  On Android, they will be in your Gallery, ready to share.  On iOS, you need to tap on the photo, select the three dots, then click on Export to create a copy in your Camera Roll.

Note: There is no desktop software at this time.

VIEWING AND SHARING VIDEOS
For videos, here are 2 ways to stitch and export the videos:

Option 1:
1. Open the video.
2. On the bottom, tap on the 3 dots.
3. Tap on the option with the arrow pointing up.  This will export and stitch the video to your camera roll.  If the video is not exporting, your phone is not powerful enough — see option 2.
4. Upload to your preferred sharing site.  (It already has 360 metadata.)

Option 2 (if exporting crashes the app):
1. Open the video
2. Click on edit
3. Save the file
4. Go to your phone’s DCIM\MadV360 directory.
5. Upload to your preferred sharing site.  It should have 360 metadata, but if the metadata is corrupted, you can insert 360 metadata with the YouTube metadata injector or with VRFix or with a video editor such as Collect 360 or V360.

Xiaomi Mi Sphere is available from GearBest here, which would support 360 Rumors at no additional cost to you.  Thank you very much!