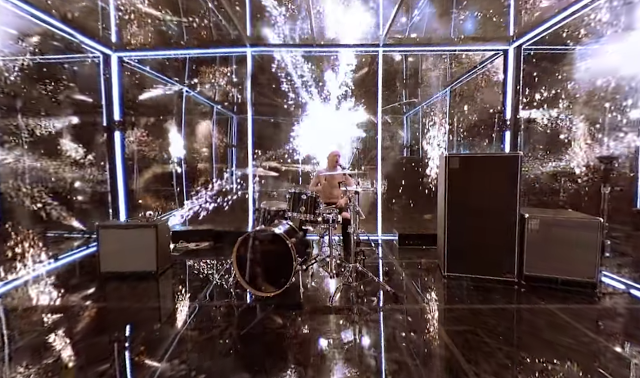 A few weeks ago, Samsung posted a 360 music video featuring Biffy Clyro.  Although the video was entitled “Samsung Gear 360 – Biffy Clyro VR,” the 360 video shows that the cameras that they used do not appear to be from the Samsung Gear 360.  The question is, which 360 camera is it from?

UPDATE:  Thanks to Pasztor Tamas of Instarfilms, we now know it’s NOT the Samsung Gear 360 and NOT Project Beyond.  See the picture of the camera in the update below!

UPDATE 2:  Dean Johnson believes it’s a 360 rig by Blackmagic, such as this one.

If you watch the video, you’ll see that it shows perspectives from three 360 cameras:

– the first is a 360 camera inside the transparent room, toward the front;

– the second is a 360 camera controlled by a robot arm in front of the room, and

– there’s a third 360 camera suspended above and behind the robot arm.

The first camera can be seen in some parts of the video captured by the second camera.  Here’s a screen shot: 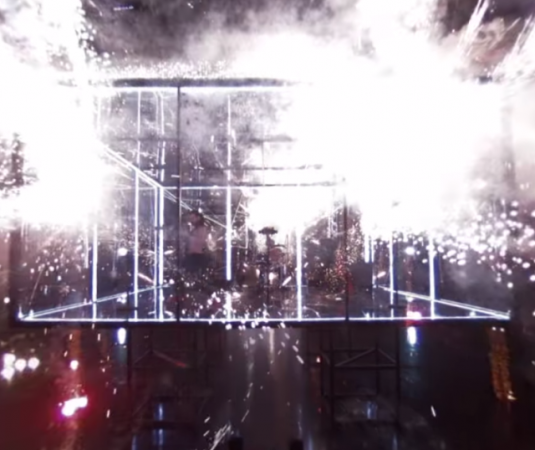 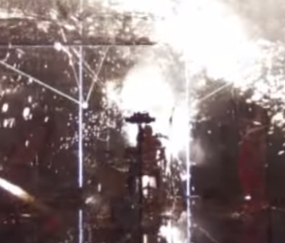 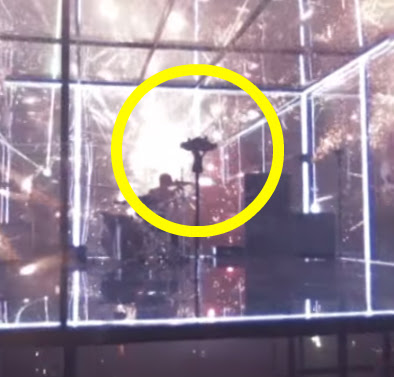 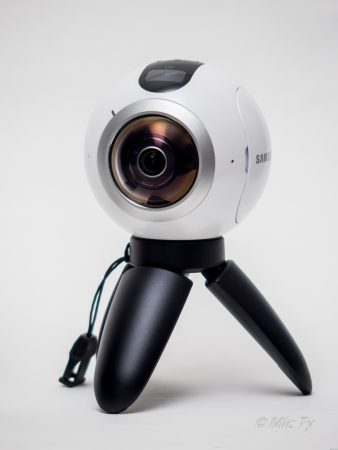 Similarly, the second camera can be seen in some footage from the third camera: 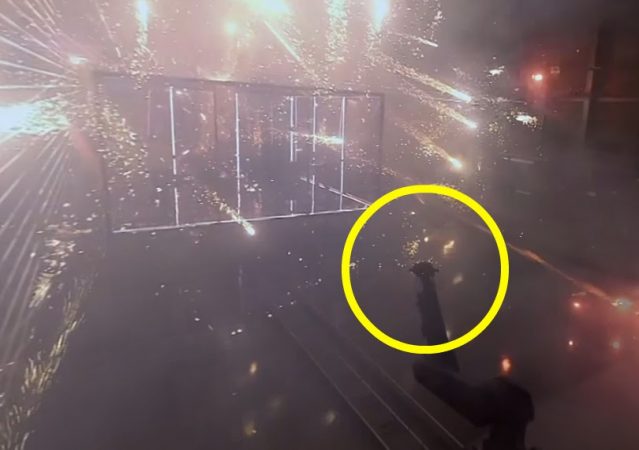 The shape is similar to the first camera and again looks nothing like the Gear 360.

Update: There’s a non-360 version of the music video on Vimeo that shows a better view of the camera: 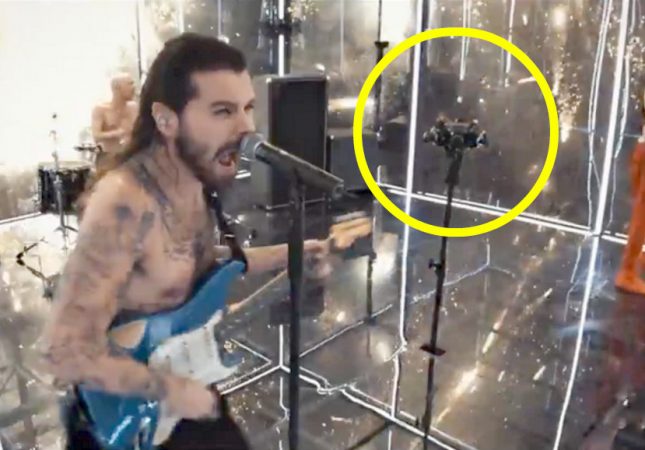 WHICH CAMERA IS IT?

There are four possibilities:

Evidence: First, the title of the music video itself says so.  Second, the video is in 4k 2D 360, and the Gear 360 does record in 4k 2D 360.  As for the appearance, it’s possible that the two cameras are Samsung Gear 360s but enclosed in a protective housing, which could make sense given the fireworks.

Counter-evidence: While that could be true for the second camera, there is no need for an external housing inside the transparent room.  Indeed, the video does actually show several Samsung Gear 360 cameras inside the room, and they are not enclosed in a housing.  Here’s one of them: 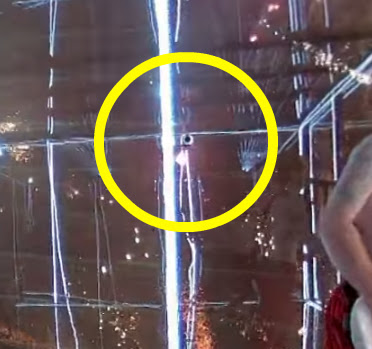 (BTW, I don’t recall seeing any portion of the music video taken from the perspective of the Samsung Gear 360, so I don’t think the videos from within the room are from the Gear 360.)

UPDATE: the non-360 version of the music video shows it’s NOT the Samsung Gear 360. 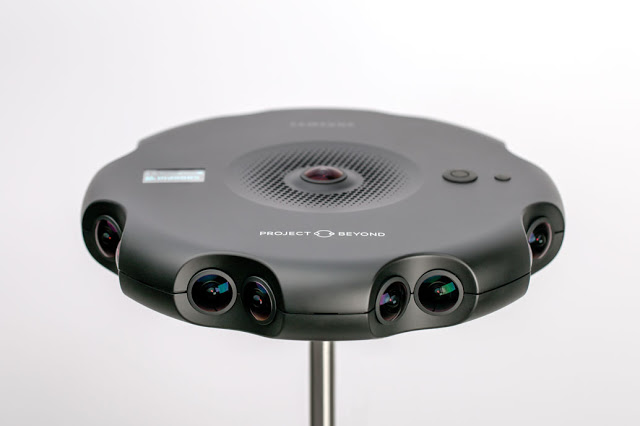 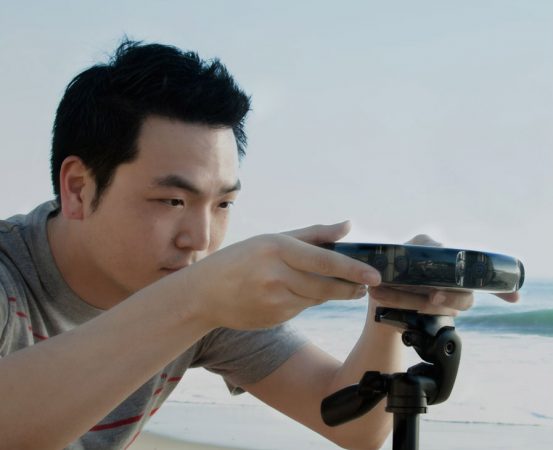 UPDATE: the non-360 version of the music video shows it’s NOT Project Beyond.

UPDATE: the non-360 version of the music video shows a six-lens camera rig.  It may be a Samsung Gear 360 Pro prototype, or it could be a custom rig built for the project.

It’s possible that the camera is not one of Samsung’s.  However, given the relatively large budget for the music video, Samsung’s promotion of the video, and Samsung’s own 360 cameras, it appears unlikely that it is a third party camera.

UPDATE 2:  Dean Johnson believes it’s a 360 rig by Blackmagic, such as this one: 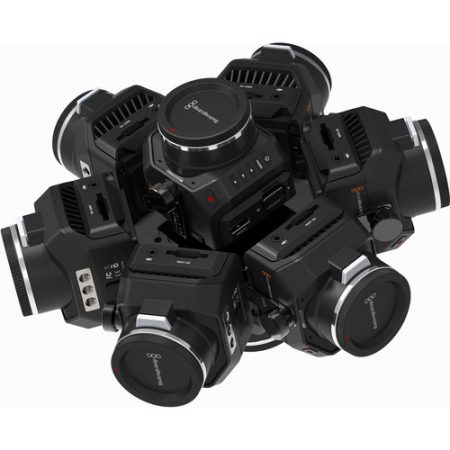 Experience a ski jump in this awesome 360 video shot with the Panasonic GH5, Entaniya 250, and Samsung Gear 360!
New 4k 3D 360 samples from Vuze camera including an aerial 360 video!
Comment