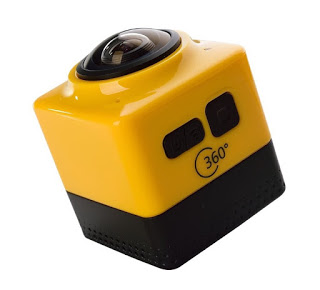 Action camera website Pevly posted a detailed roast review of the Cube 360 camera (previewed here).  Sadly, his experience was not much better than mine with the X360.

For video, the camera supposedly has several viewing modes, from circular fisheye to hemispherical to “segmentation mode” to panorama.  But those views are only for previews.  The video is recorded in only one mode: circular fisheye.  In that regard, at least the X360 really does record in several modes, including a YouTube-ready equirectangular format.
While the Cube360 was advertised as having still photo capability, reviewer Alessio discovered that the photo capability consisted of requiring the user to take screenshots from their phone.  By contrast, the X360 does have an actual photo mode and does generate watercolor paintings “photos.”
However, Alessio made no mention of any tendency for the camera to crash, which was the biggest problem of the X360 camera.

Check out Pevly’s review for the gory details of the Cube 360.