Here are some of the best deals for Cyber Monday 2017 for cameras and VR headsets and accessories.  Check back here for more Cyber Monday deals! 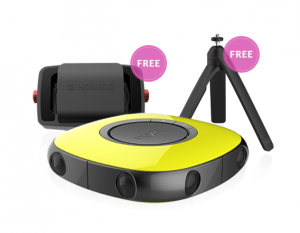 6. Zhiyun Smooth Q 3-axis gimbal for smartphones $99.  To get this price, use the code：SmoothQ23

8. Low-noise propellers for DJI Mavic Pro in gold or platinum color – 4 pieces. $5.99.  According to DJI, this new aerodynamic design for Mavic cuts the noise by 4db (60%) during takeoff and extends flight time (the total flight time will be 30 mins).  TBH I’m not 100% sure this is the original DJI product, but my Gearbest rep said it is, and it looks like it…  FWIW, the Amazon price is $34 for 4 pieces.

9. hp Mixed Reality Headset $279  or if that’s gone, try this link too.  This is the lowest cost VR headset with positional tracking.  Very similar to Lenovo – see below.

11. Oculus Rift with Oculus Touch $349.  Regularly $399.  Includes 6 free games: Robo Recall, Luckyʼs Tale, Quill, Medium, Dead and Buried, and Toybox.  Rift has the largest library of games because it can use both Oculus Rift games and Steam VR games.

Where to buy Xiaomi Mi Sphere in 2020 without overpaying? Is it safe to buy from Aliexpress? (updated August 8, 2020)