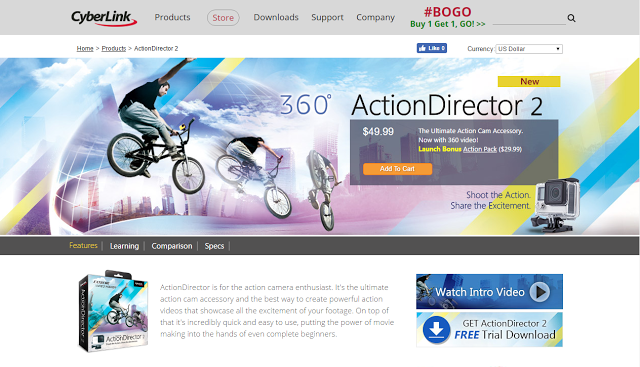 Cyberlink has now added support for 360 photos and videos to its ActionDirector 2 video editor.

ActionDirector 2 is Cyberlink’s video editor designed specifically for action cameras like GoPro.  ActionDirector 2 has features such as super slow motion and lens correction to automatically correct the distortion in fisheye lenses used in many action cameras.
Recognizing the increasing use of 360 cameras for action videos, Cyberlink has now added support for 360 photos and videos in standard 2:1 equirectangular format.  The new feature enables end-to-end 360 video editing, including titles, trimming, and adding background music, and exporting to YouTube or Facebook.  Alternatively, you can select portions of the 360 video to incorporate in your non-360 video.
With these new features, ActionDirector 2 appears to add essentially the same 360 functionality as the ActionDirector included with the Samsung Gear 360 ($279, reviewed here).
ActionDirector 2 is available for $49.99.  Meanwhile, Cyberlink also offers 360 video editing with its flagship video editor, PowerDirector 15, which has more extensive video editing features and I think would be a better value especially with the current sale price ($99.95 but the Ultra is currently on sale for $49.99). 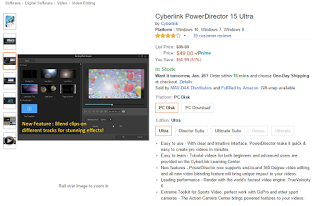