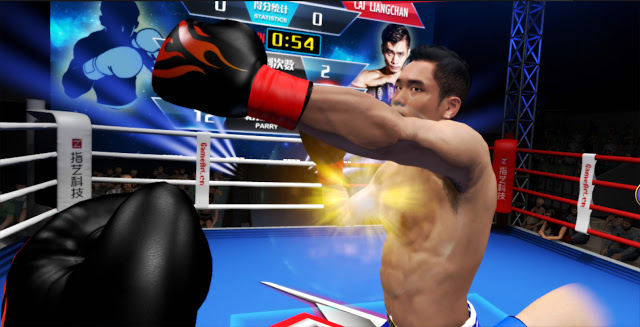 ​There’s an awesome martial arts game bundle on Steam (for HTC Vive and Oculus Rift), with a 30% discount, and both included games are very good quality. 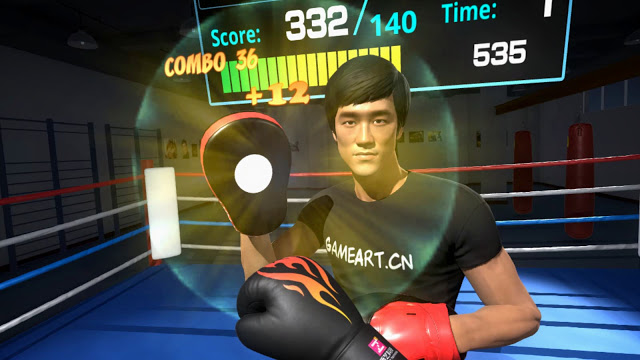 The Fastest Fist is a boxing training game where a virtual trainer​ holds mitts for you to hit (any resemblance to actual persons, living or dead, is purely coincidental 😀).  You’ll need to use jabs, crosses, hooks and uppercuts, while ducking.  I tried a few boxing classes and this felt pretty similar to the real thing.  At the end of a session, you’ll get stats so you can see how well you did (and perhaps help you improve over time).

Here’s a video by Brometheus TV: 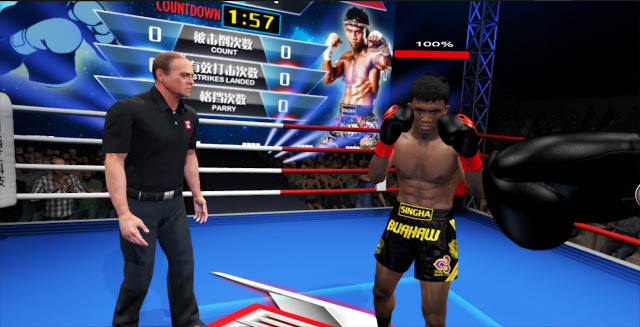 Feeling good about your boxing skills from Fastest Fist?  Now try your skills in Kunlun Fight, a kickboxing game from the same developer.  Kunlun Fight is a licensed game for the actual eponymous kickboxing competition, with the likenesses of real world fighters.

The game features some of the best graphics for a fighting game, and looks much better than the other VR boxing games I’ve tried.  Not only are the character models more realistic, but they move realistically as well.  Here is the trailer:

Kunlun Fight is a kickboxing competition.  Your opponents will use not only punches and elbows, but also kicks.  Unfortunately, your repertoire appears to be limited to using punches and blocks.

The AI is pretty good and your opponent will not just stand in front of you.  They will make some effort to go around you.  This game is definitely designed for roomscale.

The gameplay is pretty fun, and at least on easy mode it feels more like an arcade game than a simulation.  But even on easy mode, it’s quite challenging.  I’ve played many (30+) hours on other boxing games (Thrill of the Fight and a prerelease version of another boxing game), and I win almost all the time.  With this game, I haven’t won yet!

Kunlun Fight is still in early access, so there are currently only two opponents (Buakaw Banchamek and Cai Liangchan).  There is also a training mode in the menu, but the training mode does not work yet (instead it suggests that you use Fastest Fist for training).

And I don’t know if it’s because it’s early access but when I played this game, it would often jitter.  The opponent would also sometimes suddenly appear in a different position.  To be fair, my computer is not very powerful (Intel Xeon W3565 and GTX 1060 6GB) so it could be an issue with my PC performance limitations.  Update: I checked the frame timing and my CPU and GPU were both getting murdered.  But it was still usable.

OCULUS RIFT AND OCULUS TOUCH COMPATIBILITY
Fastest Fist and Kunlun Fight are designed for the HTC Vive but I used them with Oculus Rift and Touch and they worked fine.

Please note Kunlun Fight works best with roomscale (Fastest Fist is fine with standing VR).  See this guide on how to use roomscale on the Rift.

The regular price for Fastest Fist is $9.99 while Kunlun Fight is $19.99.  However, for a limited time, you can get both of them for $20.98, a 30% discount from their regular price.  I’m very pleased with both of these games and I would definitely recommend them to fight fans and those who want a good workout.