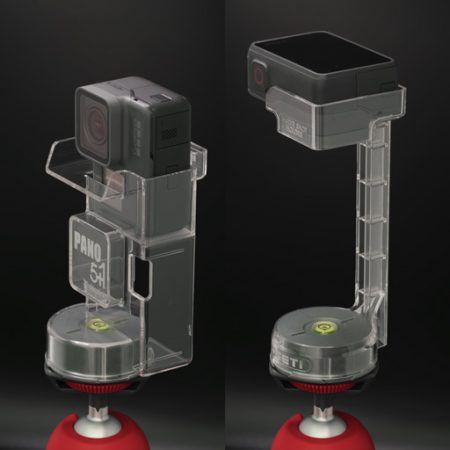 Pano5+1 mkII is a panoramic tripod head for GoPro that enables you to capture fully spherical 360 photos with 65mp resolution (reviewed here).

The Pano5+1 mkII is normally $59 but you can get it for $49, a discount of 17%.  In addition, you will get two GoPro adapters that work with a 1/4-20 tripod, a 3/8 stand, or a water bottle.  The yellow one fits 1/4-20 tripods and soda bottles such as Coca-Cola.  The blue one fits a 3/8 stand or a water bottle such as Evian.  These adapters ensure that you’ll have at least a usable stand for your GoPro if you forgot your tripod.  It also works with other cameras that use a GoPro-style mount.

Here is a comparison to the Panohero H5B:
+ costs a little less ($59 vs. $89)
+ made of acrylic and comes with a case (vs. Panohero which is 3D printed)
+ includes an adapter for GoPro Hero 3 or 4.
+ the panoramic head includes space for storing a GoPro
+ the base can be attached to a water bottle or Gatorade-style bottle
+ It is easier to take a selfie-type shot on the Pano5+1 than a Panohero H5B. This is due to the angle of the GoPro.
o both take photos of similar image quality
– Requires you to switch heads for the nadir shot (Panohero has a one-piece design).
– When taking the zenith shot, you need to remember to position the GoPro with the lens in front of the panoramic head. If you position the camera the other way, it won’t stitch correctly.