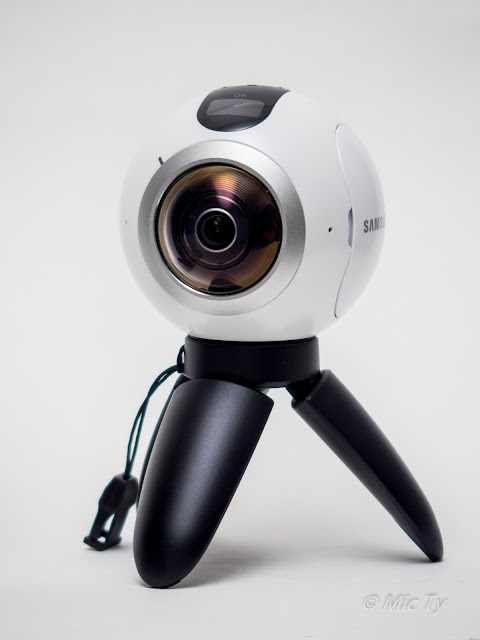 Please note there are several limits on using the Samsung Gear 360:
1.  The Gear 360 app is designed to work only with the latest flagship Samsung phones: Note 5, Galaxy S6 series, and S7 series.  There are workarounds for other high-end phones using a modified version of the app but there’s no guarantee it will work with your phone.  It’s also possible to use it on a standalone basis without an app.
2.  The Gear 360 does not stitch photos or videos in the camera.  Stitching photos or videos requires the app or the desktop software.  Stitching photos is pretty fast, but stitching videos can take a while, depending on your computer.
3.  If you stitch videos with the app, the resolution is only 2k unless you have an S7 series, which can stitch pretty quickly.  No issues stitching photos with the app.
4.  The desktop software is available only for Windows, although some Mac users have been able to use it with Boot Camp.  The desktop software also requires that you can run Open GL 2.1.
5.  When taking photos, the Gear 360 can become more blurry the warmer it gets (“Blurgate”)
6.  There is sometimes a slight but noticeable difference in color between the lenses.

That list of limits might seem long but besides the price, the Gear 360 has many advantages as well:
1. pretty good video quality with 4k resolution.
2. very good photo quality (notwithstanding Blurgate)
3. very good stitching (second only to the Ricoh Theta among cameras I’ve tested)
4. generally reliable and the controls don’t get in the way, with the best on-camera menu system among cameras I’ve tested.
5. excellent resistance to chromatic aberration.
6. splashproof, dustproof.

For sample photos and videos with the Gear 360, please see my in-depth review.