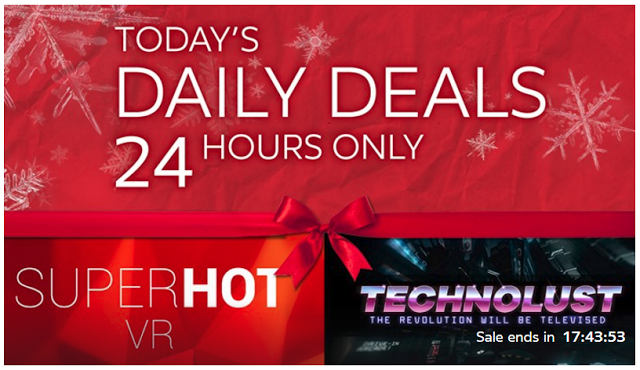 The Oculus Store has a big discount on two games (both work not only on the Oculus Rift but also on the HTC Vive via Revive).

Superhot VR is a motion-controlled VR version of the PC game (but with different level designs). In this game, you are a secret agent on a mission to infiltrate an enemy base.  You are armed with nothing and you face an army of agents.  But time moves only when you move, allowing you to execute perfectly timed attacks and dodges.  It’s one of the best VR games I’ve played.

Here is a trailer:

Technolust is an interactive story set in a cyberpunk dystopia.  I haven’t played it myself, but it looks quite immersive.  Here is a review by Upload VR:

Both games will work on both Oculus Rift and HTC Vive (via Revive) but please note that Superhot VR requires motion controllers (Oculus Rift users need to have an Oculus Touch), while Technolust requires a gamepad (HTC Vive users need to use an Xbox One or Xbox 360 controller).