This camera may look familiar.  It’s the Twin 360, an upcoming 360-degree camera which looks like a clone of the popular Ricoh Theta S:

It is to be made by Detu, makers of the Sphere 800 and the soon-to-be-launched Detu F4 (a 360-degree camera with supposedly 8k resolution).
Details on the Twin 360 have not yet been announced, however I spotted this photo at a trade event: 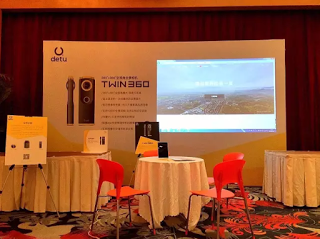 It’s very hard to read the low resolution image but it seems that the Twin 360 will have 1080p video (see blue arrow below), and will have some type of Wi-Fi capability (see green arrow):

While the 1080p video resolution is nominally the same as that of the Theta, I would not jump to the conclusion that they have the same image quality.
For related posts on Detu, click here, or on one of the labels/tags below the sharing buttons.