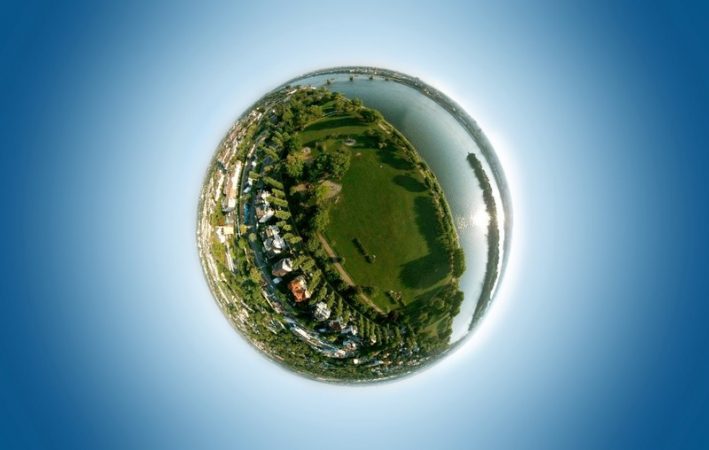 At IFA Berlin 2017, DJI announced a new feature for the Spark mini drone that would enable it to automatically take a tiny planet photo!  Plus: here’s a tutorial for taking 360 panoramas with a Mavic.

At IFA Berlin, DJI had some interesting announcements including the release of the new Phantom 4 Obsidian and Mavic Pro Platinum.  The Phantom 4 Obsidian has higher build quality and a camera with 1-inch sensor that can shoot 4K video at 60 fps.  The Mavic Pro Platinum reduces noise level by 60% thanks to a new propeller, and has a slightly longer flight time. In addition to these new versions of their drones, DJI announced that they would be adding Sphere mode to the Spark to enable it to take tiny planet photos.

It seems Sphere mode will enable the Spark to take a 360 panoramic photo and convert it to a tiny planet.  If this is indeed the case, it will result in a more detailed 360 photo than what could be captured on a consumer 360 camera. Moreover, aerial 360 photos result in more ‘realistic’ looking tiny planets. The higher your vantage point, the larger the area that you will be able to capture in your tiny planet, which makes your tiny planet look more like an actual tiny planet compared to one taken at ground level.

DJI hasn’t said whether they will be adding Sphere mode to the Mavic or Phantom. However, both the Mavic and Phantom are compatible with apps that can automate 360 panoramas, such as the Litchi app.

Here is a tutorial by Ben Claremont (Life in 360) and Joel Conroy (LilPlanets.com).

If you don’t have either drone yet, you’re in luck because Gearbest has a special on both the Mavic Pro ($939 with coupon code: Mavic811) and the Spark ($450 with coupon code: DroneTech). And if you want something even more affordable, they have a sale on the Xiaomi Drone 4K ($419 with coupon code GBMI4K) as well!

Thank you very much to Mark Marano for bringing this to my attention!