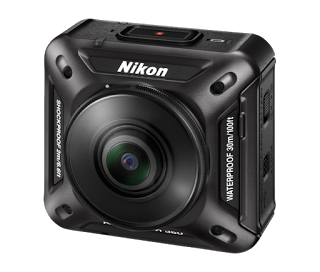 Some users have already received their Nikon Keymission 360, and they’re encountering problems.  Here are some of the issues that they’re talking about:

1. Limited control over exposure.
Nikon is one of the two largest photography companies, so most users (including myself) naturally expected that the Keymission 360 would have at least the level of exposure control offered on other cameras such as the Ricoh Theta S (reviewed here).  Unfortunately, it appears that the Keymission’s exposure controls are limited to exposure compensation (+/- 2EV).  There’s no control over shutter speed or ISO, unlike the Ricoh Theta S or LG 360 Cam (reviewed here).  Moreover, the slowest shutter speed appears to be limited to just 1 second, unlike the Theta which can slow the shutter speed to 30 seconds.

10/31 update: the software has slow playback of 360 videos (looks as if it has low framerate, even though there’s actually nothing wrong), but otherwise doesn’t seem that bad.  I’m still checking.

3.  Poor stitching.
Some users found the stitching unsatisfactory because there was a wide and soft stitch area:

The samples I’ve seen had pretty good stitching compared to other 360 cameras I have, so I’m curious about this.  I will post a comparison of stitching between the Keymission 360 and other cameras, including the Samsung Gear 360 (reviewed here) and Insta360 Nano (reviewed here).

11/1 update: Here are sample photos and here are sample videos comparing the Keymission 360 with the Samsung Gear 360, Insta360 Nano, LG 360 Cam, and Ricoh Theta S, so you can see the stitching for yourself.

Update: Sample videos from Nikon Keymission 360 from actual use at a party.  Also check out these sample videos from other users.  The Keymission’s stitching is nowhere near as good as that of the Theta (due to the larger distance between the Keymission’s lenses) but my impression is that it does not seem significantly worse than the stitching on the Samsung Gear 360, which has a similar distance between its lenses.  I’m still looking into this.

4.  Unreliable Wi-Fi connection.
Compact 360 cameras such as the Keymission 360 often rely on a smartphone for control or changing settings.  Unfortunately, some users have found the Keymission’s Wi-Fi connection to be difficult to pair, or unreliable.  Nikon has promised to fix these connectivity issues in December.

10/28/16 Update: Wi-Fi issues might be fixed by updating iOS
﻿
10/30/16 Update: Here is a step-by-step tutorial for connecting the Keymission to an iPhone or an Android.

5.  Non-standard video ratio
The standard format for 360 photos and videos is equirectangular with a 2:1 ratio.  Some users found that in some cases, the Keymission uses a 3840 x 2160 video resolution, instead of the standard 3840 x 1920. 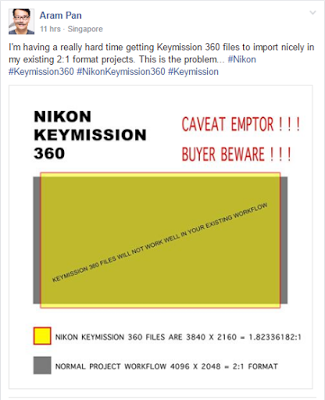 This could make it harder to edit or share videos on standard 360 editing or viewing software.

10/31 update: yes it’s true that the aspect ratio for videos is nonstandard.  The silver lining is that the videos can be uploaded to YouTube without any issues.

6.  No 360 metadata
In order for a 360 photo or 360 video to be recognized as such, 360 viewers almost always require the standard XMP Photosphere metadata.  However, it appears the Keymission doesn’t have 360 metadata.

Although it is possible to add metadata using a metadata editor, this would be a ridiculous oversight if true, and would make sharing 360 photos and videos needlessly more tedious.

10/31 update: I was able to upload the photos to Kuula.co without any problems (and without having to add metadata).  But it isn’t recognized as 360 on Facebook.  It might be because the Keymission isn’t yet on Facebook’s database of 360 cameras.  12/7 update: Solved.  Facebook now automatically recognizes Keymission photos and videos.

My Keymission 360 is due to arrive this Friday (ordered mine from B&H who upgraded to 1-day shipping, for free).  Here is a preliminary review of the Keymission 360.  I will also be working on a more in-depth review.  As with my other reviews, I will do my best to give a detailed, objective and completely candid review.