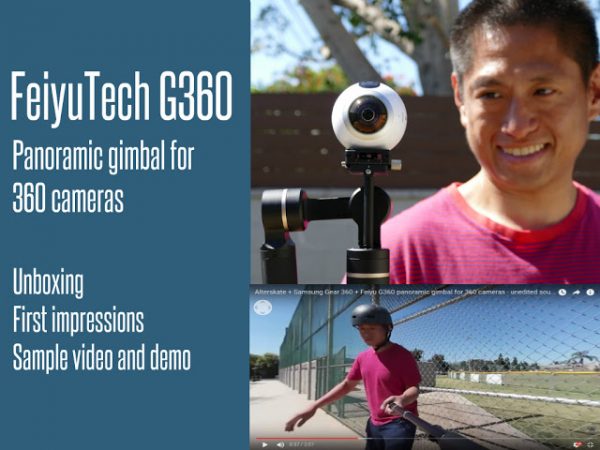 
The G360’s design is different because the handle is offset and is not on the same vertical axis as the camera. On one hand, this makes the handle more visible.  On the other hand, this design allows you to move the handle freely around the camera.  See this demo:


In the first part of the video, I used all-lock mode, which keeps the camera pointed in the same direction all the time.  In the second part of the video, I used the follow mode which will only stabilize the pitch and roll.  You can control the yaw by turning the handle.  I used this mode to keep the camera pointed at my kids as they exited the ride.

I’ve also tested the G360 with a different kind of skateboard called Alterskate, which has two sets of freely rotating axes, so you can propel yourself by making a sidewinder type motion.  I thought it would be a good test for stabilization.  Here is the video, with unedited sound so you can hear it for yourself in operation (please note I was beside a car wash).

TIP: when rendering the video,  I had to disable vertical correction in the ActionDirector options (or else the horizon would not be level).

Setting up a camera for the G360 takes a little longer than I expected.  The gimbal seems to require very careful balancing.  The good thing is that it has many fine-tuning adjustments for balancing your camera.

In terms of performance, I think the G360 performs quite well with the Samsung Gear 360 (original version).  I’ve also tested it briefly with the Nikon Keymission 360 and the Vuze Camera (with the Vuze’s width, you have to mind the handle when the handle is upside down).  I’m still testing it and am checking with FeiyuTech about some technical issues balancing other cameras with the G360.  Meanwhile, if you can’t wait for my full review, you can get the FeiyuTech G360 from Amazon here.  I recommend the kit with the extension stick (the extension stick is quite useful).