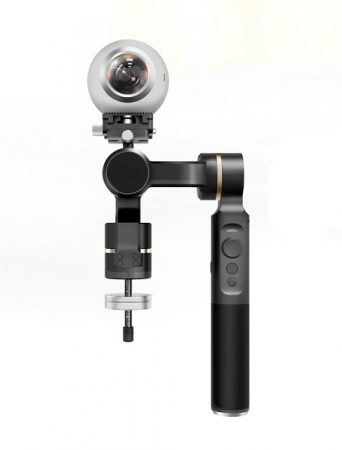 FeiyuTech announced the G360, a stabilized 3-axis gimbal for 360 cameras.

360 videos need to have a level horizon so they can be viewed comfortably.  Besides using a tripod for static shots, there are several ways to stabilize a 360 video, such as software.  One effective way to stabilize your 360 video is with a gimbal.  Conventional gimbals have motors that block a 360 camera’s view, hence the need for a gimbal specifically for 360 cameras.

FeiyuTech announced the G360 Panoramic Camera Gimbal, a stabilized 3-axis gimbal for 360 cameras, which looks like the gimbal that Kevin Kunze was trying out at CES: 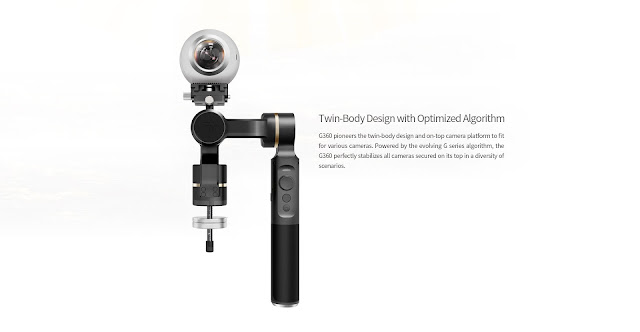 Feiyu hasn’t specified the maximum weight for the G360.  Here is the official page.  It is available for preorder here for $349.  It is now available in stock at Amazon for $349.

The G360 competes with Moza’s Guru 360 ($299; preliminary review here).  Compared to the Guru 360, the G360’s “twin body” design places the handle alongside the gimbal and puts the counterweights directly below the camera.  This has a few advantages.  First, the counterweight should be nearly invisible to the 360 camera.  As for the handle, if it is close to vertical, then it should be within the stitch line of the camera and should also likewise be nearly invisible while vertical.

On the other hand, because the design is asymmetric, it could be harder to use it with a drone.  There’s also no mention of it being usable in inverted position.  Finally, it seems that the G360 has fewer counterweights, which could limit its compatibility with heavier 360 cameras such as the Kodak SP360 4k Dual Pro, or the Vuze.  The Guru 360 also has a modular design that enables it to be used with the wearable gimbal accessory.  Although Feiyu has a wearable gimbal accessory as well, it does not appear that the G360 is modular.