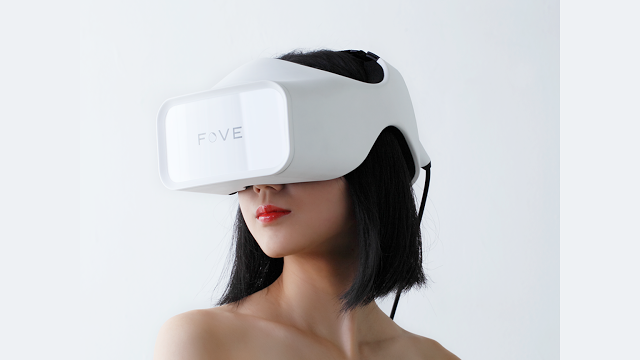 FOVE is a VR headset with eye-tracking capability, and it is now available for preorder, for shipment estimated in January 2017.

FOVE is the first commercially available VR headset with eye-tracking capability.  Eye-tracking has several benefits:
– Foveated rendering: foveated rendering is a technique that renders only a portion of the image at high resolution, leaving other parts of the image low-resolution.  This requires significantly less processing power.
– Eye-tracking can be used to control a pointer. Right now, headsets such as the Gear VR and Oculus Rift use  head tracking to control a pointer, turning your head to aim at a target.  With the FOVE, you won’t have to turn your head to aim.  Instead, you will be aiming where you are looking with your eyes.
– Virtual eye contact: by tracking your eyes, your VR avatar can have more realistic eye movement, which could enhance interactions in virtual environments.
– Simulated depth of field: software can blur parts of the image that you are not looking at, in order to simulate depth of field.

Here is a video about the FOVE headset:

If you’re interested in FOVE, you can preorder it on their website with $50 off at $549 until November 9.

Photosphere Xmp Tagger is a mobile app that can add 360 metadata to your 360 photos
TECHNIQUE: Introduction to 360 photography: 360 photo workflow and 12 ways to use 360 photos
Comment