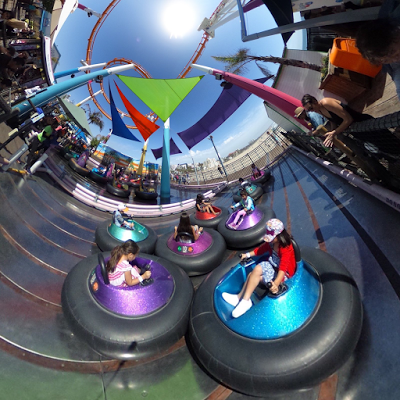 Oculus and Samsung
Oculus and Samsung are partners for the Samsung Gear VR.  Oculus shared its proprietary technology, including asynchronous timewarp, to enable the Samsung Gear VR to run smoothly.
Meanwhile, Samsung also partnered with Google for the Daydream mobile VR platform, which competes directly with the Samsung Gear VR.  While initially there was speculation that the two systems could have some cross-platform support, there are sufficient differences between them that it appears that they will be mutually incompatible, i.e., you won’t be able to use Gear VR software on a Daydream headset, and vice-versa.  It is not yet known if Samsung will have phones that support both Daydream and Gear VR at the same time, or will simply support one platform or the other.
Oculus has also announced its own standalone mobile VR headset codenamed “Santa Cruz,” which is completely untethered and has positional tracking (six degrees of freedom).  No release date has been announced for Santa Cruz but it’s all but certain that it will also use software from the Oculus store, perhaps even with full compatibility with Gear VR software, which would likely render the Gear VR obsolete.
Oculus and Microsoft
Microsoft supplies the Xbox One controller to Oculus as the gamepad for the Oculus Rift.  Microsoft also recently created a new version of the Xbox One controller that will allow it to be used with the Samsung Gear VR.
However, Microsoft also announced its own VR headset for desktop PCs, competing directly with the HTC Vive and the Oculus Rift, and indirectly with the Samsung Gear VR.  Despite its partnership with Oculus on controllers, Microsoft didn’t hold back much during its headset announcement, saying that its headset would be superior to other headsets over $500 that are “less immersive.”

HTC and Valve
HTC and Valve are partners in creating the HTC Vive (reviewed here).  Valve invented the Vive’s tracking technology, while HTC manufactures the hardware.  Valve also operates the Steam store, which is used for selling software for the Vive.
Notwithstanding their partnership, HTC and Valve also have competing interests.  HTC created its own store, Viveport, which also sells software for the Vive, sometimes at different prices from those offered on Steam.  Meanwhile, Valve has allowed access to Steam software to other headsets and has added native Steam support for the Oculus Rift, the Vive’s direct competitor, giving the Rift a potentially decisive advantage against the Vive in the desktop VR wars.
HTC and Google
HTC is manufacturing Google’s Pixel smartphones, the first Daydream-ready phones.  Meanwhile, HTC is also a partner for Google Daydream and is expected to release its own Daydream-ready phone which will sell alongside Google Pixel phones.
Qualcomm vs. Google and Samsung
Qualcomm supplies the Snapdragon processors for Google’s Pixel phone and Samsung’s phones which power the Google Daydream and Samsung Gear VR respectively.  However, Qualcomm also announced its own headset, the VR820, a standalone mobile VR headset with positional tracking, which will compete directly with Google Daydream and Samsung Gear VR.