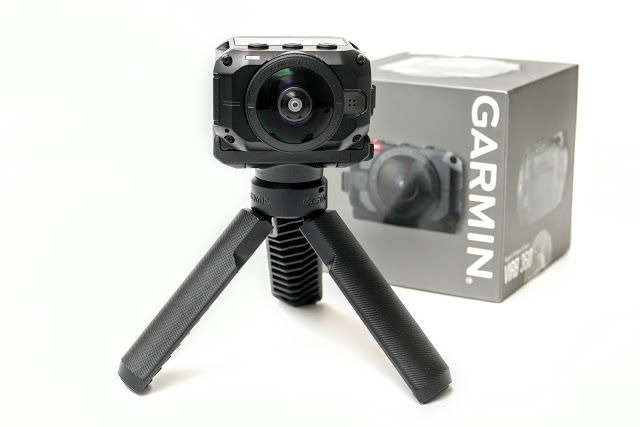 After a few delays, I finally got the Garmin Virb 360!  I’ve been really excited about this camera because of its many features.  In fact, I would say that it has the most features of any 360 camera I’ve encountered, bar none, not the least of which is its unique image stabilization that follows the user’s direction of movement instead of being locked in one direction. 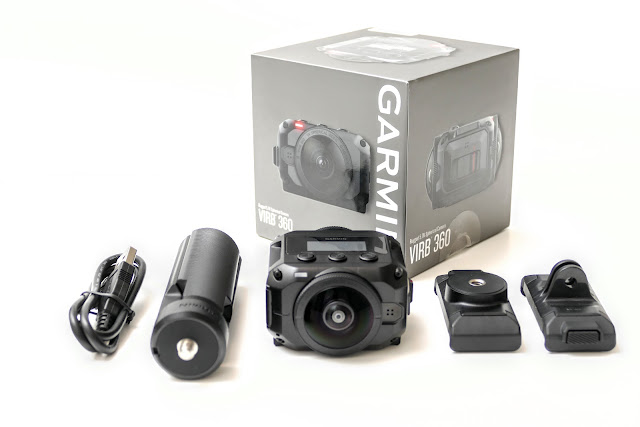 The Garmin’s box is smaller than I expected.  Maybe I expected a bigger box just because of the cost of the camera.  Here’s what’s inside:
– the Virb 360
– a mini-tripod / handle
– one battery (it appears to be specifically only for the Virb 360)
– a proprietary cradle with a 1/4-20 tripod mount
– a proprietary cradle with a GoPro-style action mount
– a micro USB cable
– warranty and quick start guide. 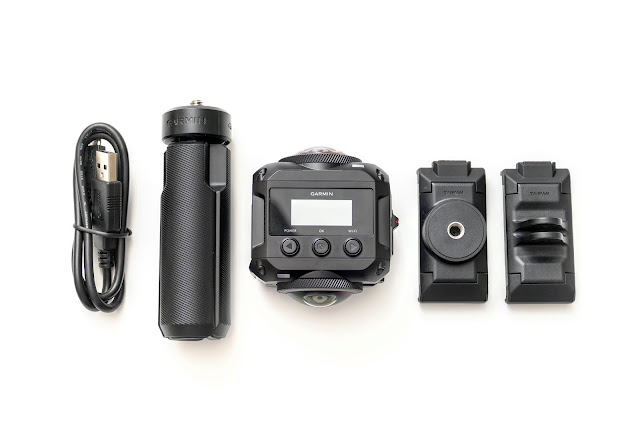 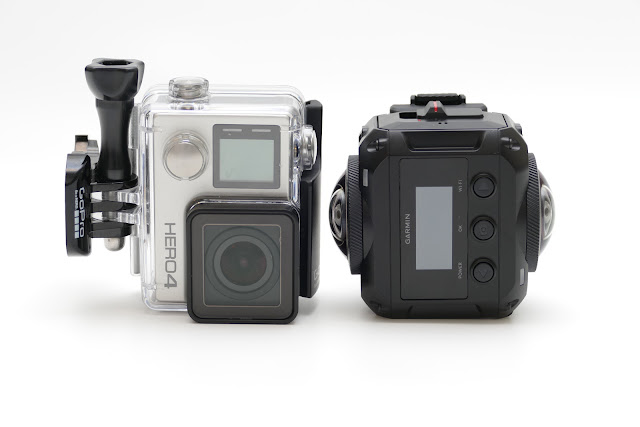 Besides its size, I was impressed by the attention to detail given to the Virb 360.  Even though it feels mostly plastic, it feels very solid and well made.  For example, the battery door and the door to the Micro SD card and ports are both spring loaded.  The cradles for the 1/4-20 tripod and GoPro mount are also spring loaded and are released by pressing a button.  Details like those make it feel like a meticulously designed piece of precision equipment. 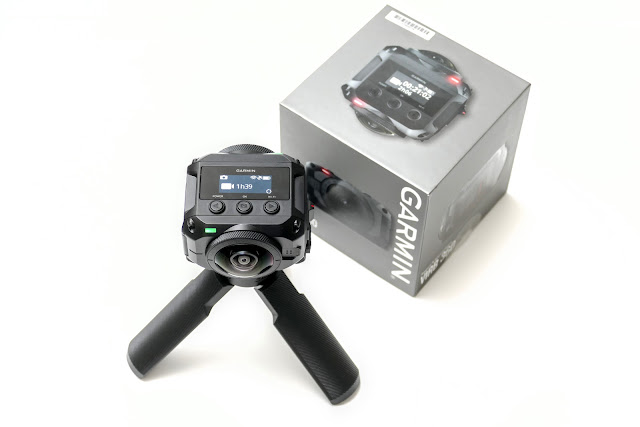 SHOOTING WITH THE VIRB 360
The camera has a three buttons for navigating the in-camera menu and for taking 360 photos, plus a separate dedicated slide switch for recording 360 videos.  There is an LCD that is not backlit but is reasonably easy to see typical ambient lighting conditions.

The menu is simple enough to navigate.  The left and right buttons act as cursor controls while the middle button is for selecting OK in the menus.

The Virb 360 is easy to shoot even without the app.  Just hold down the ok button to take a 360 photo or slide the side switch for a 360 video.  Or you can use the voice control.  Just say, “OK, Garmin,” followed by a command such as, “Start recording” or “take a photo.”  It works pretty well even with my non-standard accent.

One observation is that startup takes as much as 5 seconds and shutdown takes as long as 10 seconds.  Using the instant-on feature (which allows you to use the record button while the camera is off) takes about 7 seconds from the time you slide the switch to the time it starts recording, although shutdown from instant-on is a little faster at around 8 seconds.

I also noticed that the battery drains quite quickly especially if the Wi-Fi is on.  I will try turning off the Wi-Fi and GPS to see if there is a significant improvement in battery life.

CONNECTING WITH THE APP 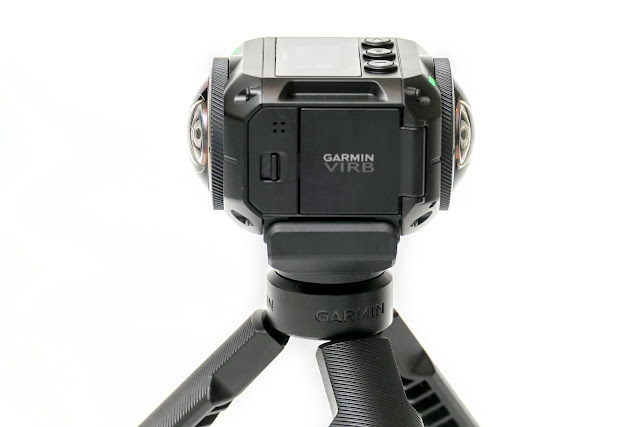 Connecting with the app is pretty easy.  For one thing, it has NFC that actually works, unlike many other cameras that I have where I have to try repeatedly to tap my phone against the camera before the NFC connects, if it connects at all.  On the Virb 360,  the NFC simply works as expected.  I simply turn on my camera, launch the app, and tap my phone on the camera.

The app’s controls are intuitive.  By default, the controls are simplified, but you can tap an icon that looks like a camera aperture to bring up a menu that enables the pro mode for the complete range of settings.   I was disappointed to see that there’s actually no manual exposure per se.  In terms of exposure, you can specify the exposure compensation (+/- 2EV in 1/3 stop increments) and auto ISO limit.  However, there seems to be no direct control over the shutter speed (except by lowering or raising the ISO limit).  Fortunately the auto ISO limit can be set to 100 (its base ISO), thus indirectly letting me slow down the shutter speed as much as possible for long exposures.  The bracketing also appears automated (you can’t specify the bracketing intervals).

The live preview works and provides a preview of the exposure, although I was surprised at how much lag there was — perhaps as much as 2 seconds or so. 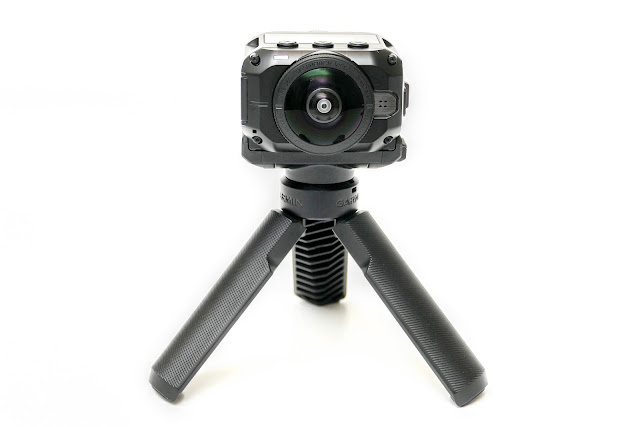 One of the key features of the Virb 360 is that photos and videos are stitched in-camera.   It is only the second 360 camera to be able to stitch 360 videos in 4K (the first one was the Keymission 360).  True enough, if you access the memory card directly, you’ll see fully stitched photos and videos (unless you change the default photo mode to unstitched).  However, the photos don’t seem to have 360 metadata.  Another quirk is that the photos aren’t exactly the standard 2:1 ratio.  Their resolution is 5640 x 2816, and on some apps, it results in a small black spot appearing at the zenith of the 360 photo.

Sharing photos and videos from the app is simple – in theory.  By default, photos and videos stay in your camera’s memory card.  Not until you export them from the app are they downloaded to your phone.  Exporting is fast for 360 photos.  For 360 videos, it takes a little while – and more importantly, as of Android build 4.0.0.0, I cannot export videos in 4K.  Instead, when I try to, I get a message saying my phone (Samsung S8+ with Snapdragon 835) has “trouble exporting” at 4K resolution.  Really now, Garmin?  This appears to be a bug since no one I know has been able to export from the app at 4K (even with an iPhone 7+).  UPDATE: The app has been updated and my Samsung S8+ now exports at 4K.

Anyway, these are my first impressions so far.  I was testing the camera last night so it was too dark to get any good photos or videos, but I will take some today and this weekend to check the image quality, especially with a view to determining how it compares to other 360 cameras such as the Xiaomi Mi Sphere.

10 cool features of the Virb 360 that you might not know about
12 things you should know before buying the Virb 360
Virb 360 is available at Amazon or B&H Photo.