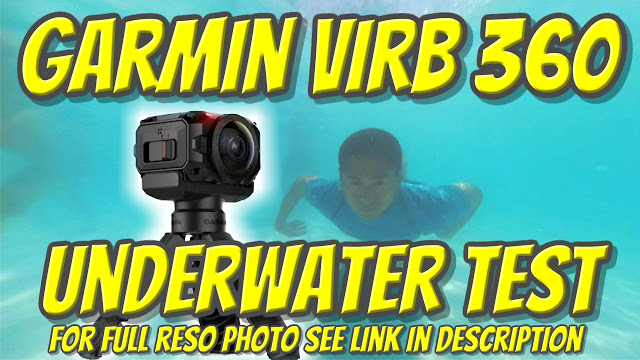 I hope you had a great Father’s Day weekend.  Over the weekend, I tested the Garmin Virb 360’s underwater capabilities in a swimming pool.  Here are videos and photos.

The Garmin Virb 360 is waterproof up to 10 meters, without needing a housing.  The Virb is only the second 360 camera for consumers to do that (the first was the Nikon Keymission 360).

Of course, just because a camera is waterproof does not negate the laws of physics.  In particular, refraction will often be an issue.  That is why in my list of 12 things to know about the Virb before ordering, I warned that Garmin had not posted any underwater photos or videos, and that there would likely be refraction underwater.

I took the Virb 360 to a swimming pool to find out.  As expected there was refraction.  Nonetheless, the stitching looked better than the other 360 cameras I’ve used underwater, such as the Keymission 360 (see these samples by Young360), the Elecam 360 with its housing (see these samples from Elecam), the Gear 360 2017 (with a waterproof pouch, and with an water-resistant case), the 2016 Gear 360, and the Nano, Xiaomi Mi Sphere.  (Please note the water conditions were not identical.)

Anyway here is the video:

Here are full resolution underwater photos (along with other photos):

Without an underwater housing with spherical lenses, I think this is as good as it gets.