Can the Garmin Virb 360 capture underwater video with seamless stitching after all?  That’s what seems to be the case in this sample 360 video posted by 360 Labs.  UPDATE:  See the comment from 360 Labs!

The Garmin Virb 360 is a rugged and waterproof 360 camera with detailed 360 videos of up to 4K with in-camera stitching or 5.7K unstitched (recorded as two 4K 2880 x 2880 circular fisheye videos).  However, when I took sample underwater videos with the Virb 360 using the in-camera stitching, I found that the stitching did not compensate for underwater refraction which significantly reduces a lens’ effective field of view.  See this post.

Nonetheless, 360 Labs posted a sample video from the Virb 360 with an underwater scene that seems to be seamlessly stitched.  Here is the video (jump to 01:39 of the video):

Here is a low-res screen grab (not the full resolution) from what seems to be the stitch line — except it’s hard to tell whether this is truly the stitch line.  It’s THAT smooth.  Note also that this isn’t just some simple swimming pool with repetitive tiles that could disguise a stitching error.  These are random rocks. 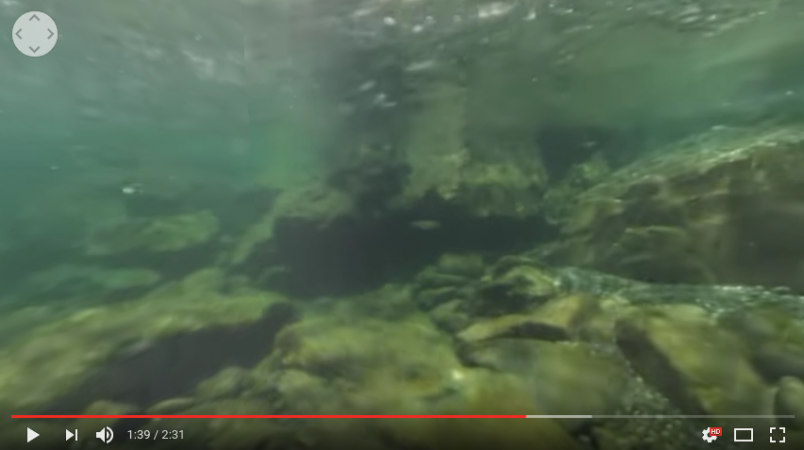 UPDATE: 360 Labs responded and said there was no underwater housing but the underwater stitching doesn’t meet their professional requirements.  “It’s good enough to fool the eye if nothing moves by the stitch line, but as soon as something moves past it, you’ll see it’s far from perfect,” they said.  Here’s an excerpt from their Garmin Virb 360 review: “It’s also important to keep in mind that although the Virb 360 is waterproof, it’s not designed for underwater use. Due to refraction underwater, you’ll be missing a lot of information in the middle of your stitch, objects moving by the stitch line such as fish or people will disappear given the fact that the camera does not have corrective lenses for diving. So while it’s a good camera that can survive a dunk, it’s not a camera you can use underwater exclusively and get good stitching results.”

Thank you very much to Pepe Vazquez for bringing this to my attention.

Be the first to try a hands-on demo of Insta360’s new camera in Tokyo!
You’ll never guess which NEW 360 camera was used for this AMAZING 360 photo!
Comment