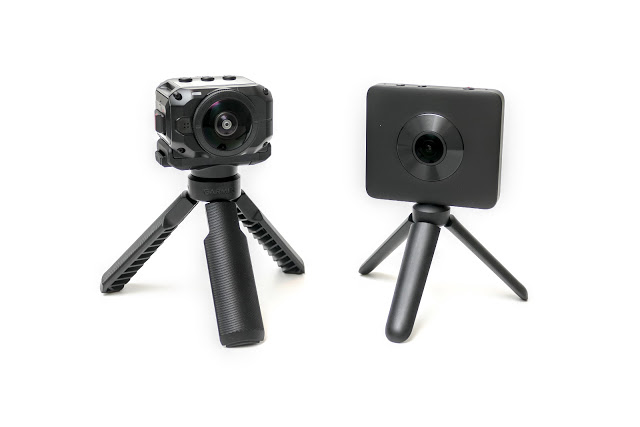 Here is a quick informal photo and video comparison between two of the best 360 cameras at the moment: the Garmin Virb 360 ($799; first impressions here) and the Xiaomi Mi Sphere ($250 to $300; reviewed here).
When I reviewed the Xiaomi Mi Sphere, I found it to have the best photo and video quality among consumer 360 cameras around $350 or less.  Meanwhile, the Garmin has launched the Virb 360 with 5.7K video* (4K in-camera stitched), which is the most feature-rich 360 camera I am aware of, bar none.

Both cameras feature image stabilization, which puts them heads-and-shoulders above the competition, IMHO.  No doubt the Xiaomi is a great choice, but is it worth spending the extra to get the Virb 360?  To help you answer that, I took a quick sample of photos and videos from these two cameras for comparison.  (Note: the Virb is using firmware 2.70, while the Xiaomi is using firmware 12494).

Here are the videos.  The first is a montage that alternates between the two cameras.  The other two videos in the playlist are the Virb 360 by itself, and the Xiaomi by itself.  The videos are unedited with default settings except that I added titles and I dovetailed the videos using Adobe Premiere Pro, rendered at constant bit rate of around 80mbps with “maximum depth”:

Here are 360 photos for comparison:

I will take more sample photos and videos.  Of course, photo and video quality are just two of the factors for choosing 360 cameras, not including other issues such as features, workflow, and of course, price.  Watch for my full review of the Virb 360!