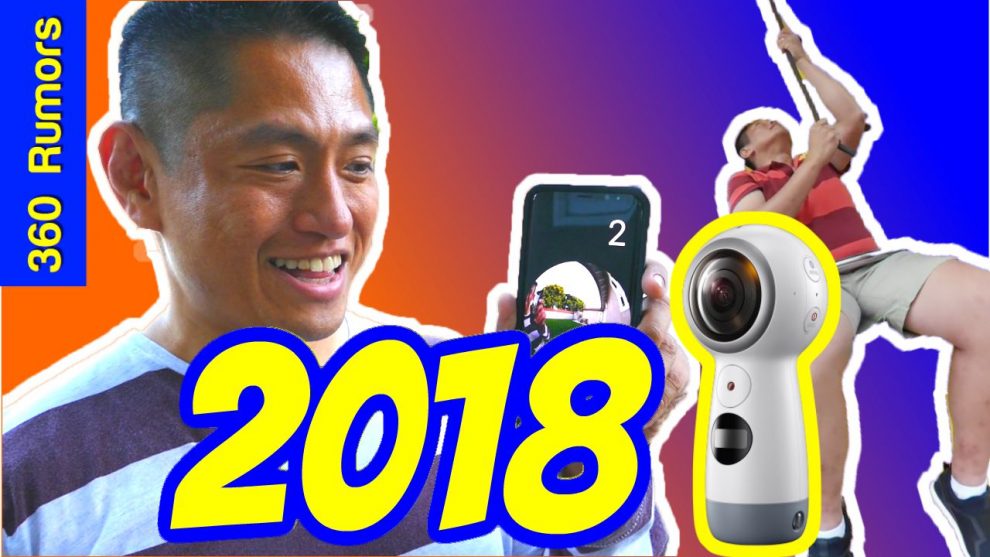 – Why the Samsung Gear 360 2017 is perfect as a personal camera
– How it will enable you to PERFECT SELFIES the first time, every time
– Gear 360 unboxing: what’s inside
– How to use the Samsung Gear 360 2017 from SHOOTING to SHARING
– Where you can share your photos and videos for more views (besides YouTube and Facebook)
– Gear 360 2017’s advantages and disadvantages
– Its UNIQUE features that no other 360 camera has.
– How to improve image quality with HDR mode: a comparison
– The new dedicated remote: how to pair and why to use it; maximum range.
– The waterproof case
– Samsung Gear 360 2017 compatibility and workarounds
– Facebook’s future plans and why you need to use this camera NOW

The 2017 Samsung Gear 360 was one of the most highly anticipated 360 cameras for 2017.  The original Samsung Gear 360 was a very good camera (reviewed here) but it had too many requirements, which limited the number of possible users.  Rumors of its successor had been circulating since September 2016 and it was finally revealed at Samsung Unpacked 2017.

The changes in the 2017 Gear 360 addressed nearly all of the concerns about the original Gear 360, including compatibility with non-Samsung phones.  Photo resolution decreased to half of the original (15mp) but the original price also dropped from $350 to $250, hinting that Samsung wanted to appeal to a broader market. 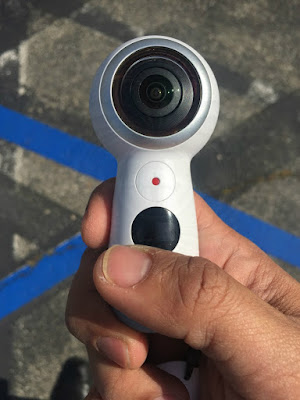 The 2017 Gear 360 is small and although some have chuckled at its design, there’s no question that it is ergonomically superior to the original Gear 360.  Notwithstanding the difference in appearance, the controls and the look and feel will feel immediately familiar to users of the original Gear 360 – it feels solid and sleek, and the on-camera controls (buttons, OLED screen, menus) are still the best in the industry.

The 2017 Gear 360 connects easily with the app. Launch the app, turn on the camera, and tap on “Connect” and within a few seconds, the app connects to the Gear 360.  (If you’re already connected to your original Gear 360, it will probably try to connect to your old Gear 360 so instead, you tap on the upper right corner and choose the option to connect to a new Gear 360.)

The app’s menus are similar to those of the original.  Here’s the screen with the white balance options shown. 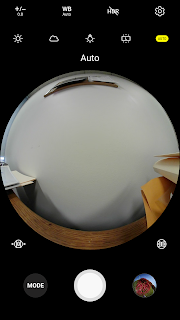 There is a live preview with a pretty good framerate and little lag.  One of the differences from the old app is that there are several viewing modes available: 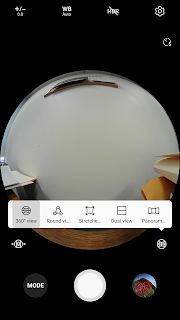 Here are the available shooting modes: 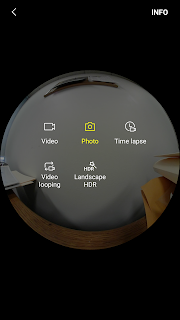 Landscape HDR is a true multi-shot HDR. It appears to take two shots and blends the exposure. 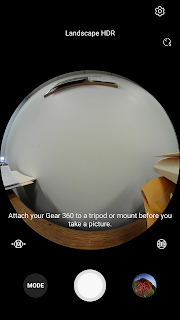 Here are the available settings.  You can also change exposure compensation (up to 3EV) and there are white balance presets.   For the auto ISO limit, you can choose between 400, 800, or 1600.  Unfortunately, no manual controls. 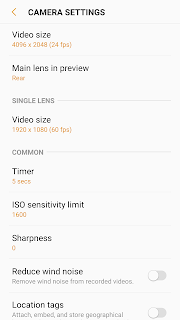 Shooting is just as easy as it was on the original Gear 360.  Stitching is via the phone.  When you save photos onto your phone, they are stitched at the same time.  One difference is that videos can now be stitched in full resolution on my phone.  With the original Gear 360, you needed an S7 to stitch in 4k, and with a lower-end phone like my S6, phone stitching is limited to 2k.  I haven’t tried stitching on the old Action Director yet.

The Gear 360 2017 works only with Samsung S6 and above, or iPhone SE and above (iPhone 6 is listed as compatible but the app keeps crashing for 360 videos).

The Gear 360 2017 does include a desktop app for both Windows and Mac, but it will require a 3rd generation Intel Core processor.  The software can be activated with your camera’s serial number.

If your phone and desktop are both incompatible, here are alternatives / workarounds:

Another option for stitching Gear 360 photos is to use nadirpatch.com, a free / ad-driven website.

2. For stitching videos, you can use third-party stitchers.  For Windows, you can use Magix Movie Edit Pro Plus 2018 or later (regular version; discounted student / teacher version).  For Mac, you can use Muvee stitcher.

Workflow; how to share your photos and videos; how to get more views

Photos and videos from the Gear 360 must be ‘stitched’ or combined to make them viewable in 360.  Fortunately, it’s very simple to stitch them.  All you have to do is connect your Gear 360 smartphone app to the camera and save the files to your phone. Saving them to your phone will stitch the files at the same time.

There is also an option in the gallery where you can turn on “Stabilization.”  This will stabilize and stitch the files at the same time.  Otherwise, you will have to stabilize a file after downloading it by tapping on the stabilization button.

Here are some sample 360 photos and 360 videos and an analysis of their image quality.

Here is a sample 360 video with stabilization:

Here are some sample photos, including some Landscape HDR samples.

Resolution and detail: The Gear 360 2017 has very good resolution, with very consistent sharpness across the frame.

Exposure and color: I like the exposure, the colors, the tonality are all excellent in my opinion – well-balanced, natural-looking yet also vibrant and neither dull nor over-processed.  They look good without editing, in my opinion.

Dynamic range:  The Gear 360 2017 has good detail in highlights but not much detail in shadows.  However, both photos and videos have an HDR option.  It’s not a true multi-exposure HDR fusion, but it really does make a difference.  There’s a noticeable improvement in both highlight detail and shadow detail:

Glare: The Gear 360 2017’s biggest weakness for image quality is its susceptibility to glare.  It has less glare than the original Gear 360, but it is still more vulnerable to glare than many other 360 cameras.

In summary, the 2017 Samsung Gear 360 is not only an affordable 360 camera, but with image stabilization and in-camera HDR, offers good quality 360 photos and videos regardless of the price.  Its most significant drawback for image quality is its susceptibility to glare.   However, given the huge price difference from other competing 360 cameras, its shortcomings as to image quality can be overlooked.

The real “catch” to the Gear 360 is that it has limited compatibility and it has a slow workflow.  The new stabilization feature works only in the smartphone app (not the desktop software), and the app in turn only works on Samsung phones (S6 and above) and iPhone SE and above.  Moreover, downloading the photos and videos to your phone to stitch and stabilize them takes a very long time, and the app can crash from time to time, even with a relatively high-end phone such as a Samsung S8+.

If you have a compatible phone, the Gear 360 2017 is probably the best value entry-level 360 camera (available here).  But if you foresee taking many 360 photos or videos, you may want to consider a 360 camera with an easier workflow such as the Xiaomi Mi Sphere (reviewed here) or the Insta360 ONE (reviewed here).