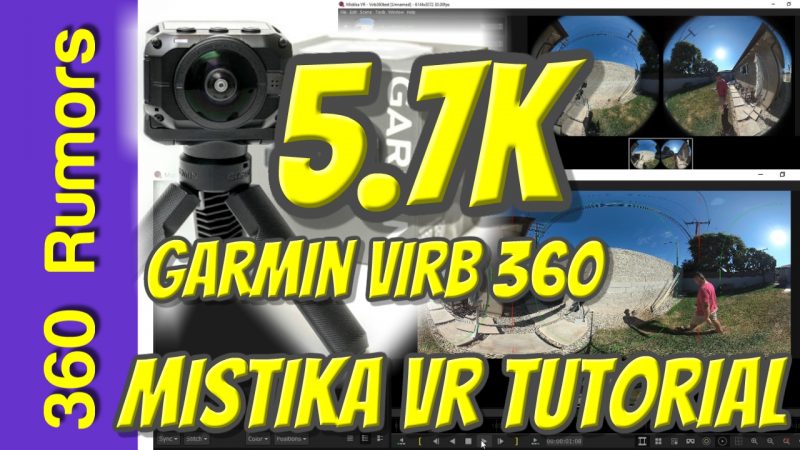 To get 5.7K 360 video from the Garmin Virb 360, you need to use a 3rd party stitching software. SGO’s Mistika VR is a powerful stitching software that can use optical flow stitching for almost any 360 camera or rig. Here is a basic tutorial and demo.

Garmin Virb 360 is a 360 camera with the most detailed 360 video among consumer 360 cameras as of August 2017.  The videos are stitched in-camera at 4K, which is convenient.  However, in-camera stitching is almost always limited to template-based stitching, which means that the stitching will be performed for a specific distance.  Any object that crosses the stitch line farther or closer than that specific distance will have parallax stitching errors.

The Virb 360 has another video mode that enables it to shoot unstitched 360 video at 5.7K resolution (as two separate circular fisheye videos at 2880 x 2880 resolution, according to the specifications).  The unstitched video must be stitched using third party software, such as Mistika VR, a powerful stitching program that uses optical flow stitching.

To recap, here are the steps for a basic stitch:
1. Open a new project.
2. On the main panel, right click to add the videos that will be stitched (“add cameras”). In the file selection dialogue box, you can drag the files into the main panel. If necessary, drag the files to place them in the right order.
3. When the videos are loaded, you can get a jumpstart by using a preset. Right click on the main panel and select ‘Load preset.’ Try one of the presets and see how well it works for your video. For the Virb 360, the Kodak SP360 preset works.
4. If there are stitching errors, pause (or stop) the video in the scene that needs to be fixed and click on position then “improve alignment.”
5. When you’re ready to render the video, define the range that you want to render by using the marker below the video along with the Edit In [ and Edit Out ] brackets.
6. Select the audio track that will be used for the video by clicking on the sound icon beside the video for which you want to use the audio.
7. Go to File… Export. Select “Current Shot.” Specify the format, bitrate, filename and destination.
That’s it.

As you can see from the video demo, Mistika’s optical flow makes the stitching on the Virb 360 seamless at all distances.  Mistika can apply optical flow stitching not just for the Virb but for almost any 360 camera or rig.  There are presets for popular 360 cameras such as the 2017 Samsung Gear 360 (using Mistika, you can avoid the warping that occurs using Gear 360’s own stitcher). Here is a sample using the Xiaomi Mijia Mi Sphere 360 camera (you don’t even need to split the files):

I used the Samsung Gear 360 preset, which I modified by adjusting the focal length to 10.4.  If you need a preset that they don’t have, you can send send the unstitched files to SGO, and they will create a preset for you.

In fact, this video demonstration barely scratches the surface of what Mistika can do.  It has many more functions, which I’ll demonstrate next time.  (To see some advanced functions, check out Hugh Hou’s demo of Mistika with the Insta360 Pro, which has six lenses.)

Mistika VR is available as an annual or monthly payment.  Garmin Virb 360 is $799, and is available from Amazon or B&H Photo.

How to Stabilize 3D 360 video with Canvas 360 Pro for After Effects
Learn from my mistake: ignore audio at your own risk
Comment