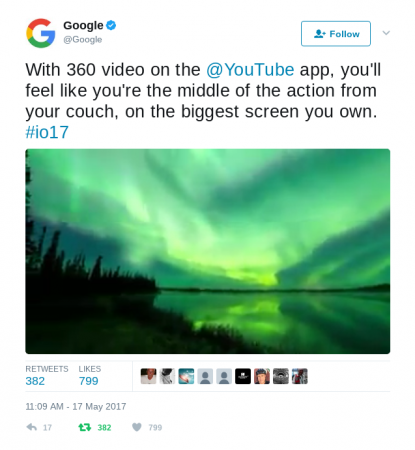 At Google I/O 2017, Google announced that YouTube apps for TVs will now allow you to watch 360 videos and look around using your remote control, making it possible to view 360 videos with your friends.

With 360 video on the @YouTube app, you’ll feel like you’re the middle of the action from your couch, on the biggest screen you own. #io17 pic.twitter.com/Y3LmQaKD54

I tried this with Google Chromecast 2 and with the YouTube app on my Amazon Fire, but only saw the equirectangular version.  I’ll keep testing and trying it out on my other equipment.

In any case, for 360 video creators, this is awesome news because it expands the audience for 360 videos.  Hopefully, this also leads to an increased interest in 360 cameras, especially among those who don’t already have one.