Is the GoPro Fusion good enough to replace your smartphone or action camera, to serve as your ONLY camera?   Is there any advantage for doing so, and why is this a very important question for the 360 camera industry?

Digital cameras replaced film cameras, and smartphones have replaced built-in lens digital cameras.  In each case, there was a tipping point where the new technology was ‘good enough’ and other factors such as convenience became more important for buyers.  In this post, I will discuss whether 360 cameras — specifically the GoPro Fusion (reviewed here) — can now replace smartphones or action cameras as the only camera for casual users.

360 camera advantages — but with a catch

For documentary photos and videos, 360 cameras are generally superior to conventional cameras.  (360 cameras can be good for art as well, but we can talk about that next time.)  A non-360 camera allows you to capture a subject, but a 360 camera captures not only that subject but everything around it, thus capturing the subject, the time, and the place in a single shot.

Beyond capturing an all-encompassing perspective, a 360 view confers unique capabilities on 360 cameras, such as incredible gimbal-like stabilization (when paired with a capable sensor and software).  Stabilized 360 cameras can also appear invisible when used with a sufficiently narrow selfie stick or monopod, giving users the ability to shoot videos that look like they were shot by a professional cameraman using cranes or jibs.  Stabilized 360 cameras also free the user’s attention and allow the user to focus on the activity or event, instead of trying to frame the photo or video.  You can see other advantages here (it’s a short video about the Nano S, another 360 camera — most of the benefits apply to the Fusion as well).

Although 360 cameras are theoretically better than non-360 cameras for documentation, they do have one significant tradeoff, which is generally lower image quality.  Consumer 360 cameras use the same sensors as smartphones and other digital cameras.  Although 360 cameras have two or more such sensors, each sensor typically captures a greater than 180-degree circular field of view (180 degrees vertically and horizontally).  By contrast, the sensor in most smartphones is paired with a lens that is usually the equivalent of 28mm, which corresponds to a horizontal field of view of only 65.5 degrees and vertical field of view of only 46.4 degrees).  A smartphone will therefore have many more pixels per degree field of view, compared to a 360 camera with two of the same sensors, and thus higher image quality (all other factors being equal).

What is the Tipping Point for 360 Cameras?

The question is at what point do 360 cameras become ‘good enough’ to replace smartphones as cameras?  To answer this question, I reviewed the sales data for built-in lens cameras.  I found a helpful chart on Photography Life that shows how sales for digital cameras dropped significantly in 2014, before nosediving in 2015.  Check out the original Photography Life article here. 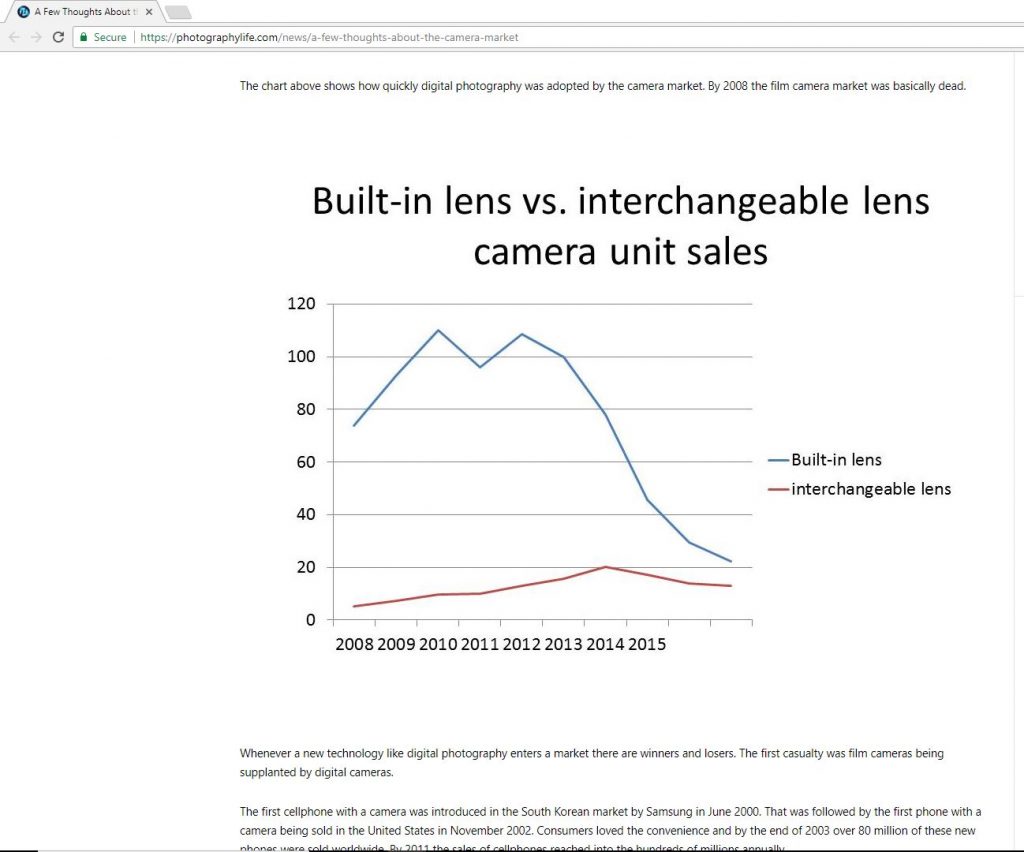 Digital camera sales plummeted when smartphones became ‘good enough,’ and that’s the tipping point for consumers.  In 2014, Apple released the iPhone 5S and in 2015, they released the iPhone 6.  I would therefore argue that if a 360 camera can produce an image ‘as good as’ that of an iPhone 5S or iPhone 6, it meets the threshold of qualifying as a replacement.  That’s exactly what I tested here — by comparing the GoPro Fusion against the iPhone 6.  I also compared the Fusion against the Hero 5 Black.

Before we get to the comparison, there’s an important question — what does it mean to be ‘as good as’ an iPhone 6?  As we mentioned earlier, 360 cameras have two sensors, and they capture a far wider field of view.  This makes it very difficult to do a direct comparison between a 360 camera and a non-360 camera.

The distances from the wall turned out to be as follows:

I viewed the samples from the Fusion using GoPro VR View 3.0, using the default viewing size, with equirectangular projection, in full screen on a 1080p monitor.  I viewed the iPhone 6 and Hero 5 Black videos using the Movies & TV app in Windows 10, also in full screen.  For the iPhone and Hero 5 photos, I used the Photos app in Windows 10, in full screen.  I didn’t zoom in or zoom out, except that to make the bricks the same size, I had to roll the mouse scroll wheel to zoom in one notch for the Fusion photo or video (this puts the Fusion at a slight handicap).

I noticed also that the iPhone was already pre-sharpened, therefore I used the sharpening setting on GoPro Fusion Studio 1.1 and set it to 160 (a very modest sharpening).

Here are the results.  Caveat: at the time I took these tests, my Fusion was already scratched from an accident.  Therefore there is a blob in the photo.  Pls. ignore it.

First, the video comparison.  Here is a smaller version of the comparison.  GoPro Fusion is in the middle.  iPhone 6 is on the left, while Hero 5 Black is on the right.

You can see that the bricks are approximately the same size.  At this view, the Fusion is either equal to, or a little more detailed than the iPhone 6, and better than the Hero 5 Black (in 1080 mode).  You can see in the full size comparison available for download here.

I also did a comparison for photo quality.  Again, the iPhone 6 is on the left, the Fusion in the middle, and the Hero5 on the right.

In the photo comparison, the iPhone appears to have greater acuity, but in terms of level of detail at this viewing size, the Fusion is very similar to the iPhone 6 and Hero 5 Black. The full size comparison for available for download here.

Based on my testing, I conclude that the GoPro Fusion has similar photo quality an iPhone 6 or Hero 5 Black, when they are each used to shoot a subject so that the subject appears at a similar size.  For video, the Fusion video quality is equal to, if not better than the iPhone, and is better than the Hero 5 Black (in 1080 mode).  In other words, I would conclude that the GoPro Fusion has reached the threshold where it can replace a smartphone or action camera as a camera for photo as well as video.

While the Fusion has the capability of becoming a smartphone or action camera replacement, there are at least two significant challenges.  The easier challenge is fixing the mobile app to make it easier for consumers to create overcapture photos and videos (right now the Android version doesn’t have an overcapture feature) and to export 360 photos and videos.  The more difficult challenge is that the Fusion’s benefits are not obvious to consumers, and so the 360 community must seek to educate consumers about the advantages of stabilized 360 cameras.

As for other 360 cameras, I believe there are others that can replace smartphones or action cameras for photo, such as the Xiaomi Mijia Mi Sphere, Madventure 360 and Insta360 ONE.  As for video, the Yi 360 VR might be able to serve as a smartphone replacement.  But GoPro Fusion (available here) is unique in being the 360 camera that can best serve as a smartphone replacement for both photos and videos.  Pls. look out for my video review – I promise it will be worth the wait.