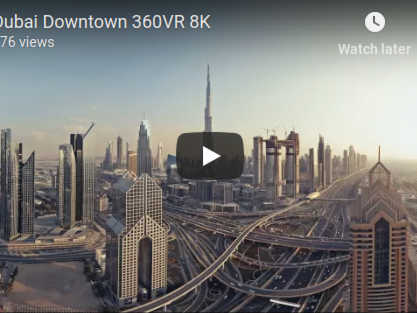 The GoPro Omni is now available for the impossibly low price of just $1399, a 72% discount from its original price of $5000!!!  That’s brand new, and includes Kolor Autopano Video and Autopano Giga software.   If you have any doubt about whether the GoPro Omni is still a “good” 360 camera in 2018, check out this 360 video that 360 Cities chose as its 360 Video of the Year, shot by Peter Van den Wyngaert (Littleplanet.be):

Here is the BTS shot showing Peter’s setup for the video:

EDIT: I’ve been getting several questions about whether Omni is obsolete. All of these questions come from the idea that Omni is just the same as a rig of 6 GoPro Hero4 Blacks. Actually, that’s not true at all. Here are differences between Omni and a typical rig:
1. When you change the settings on one camera, the other cameras follow the same settings on camera 1. Same exposure, etc.
2. The cameras are synchronized.
3. When you import the files, you DON’T have to match the files. That’s one of the most tedious things about using a rig. With Omni Importer, you copy the whole SD card into a separate folder. Omni importer matches each file automatically.
4. When you import the files, omni importer gives you a 360 equirectangular preview of each video. Actually, it’s very similar to GoPro Fusion, except that you need to copy files from 6 sd cards instead of 2 sd cards, and you put them into 6 folders instead of 1 folder.
5. Before stitching, you can make basic adjustments the image setting.

Here is a video about the Omni workflow:

The main disadvantage of the Omni for me versus another GoPro rig is that it can only use Hero4 Black. It can’t be upgraded to use Hero5 (which uses the same sensor as Hero4 Black but has raw mode and is waterproof) or Hero6.  But then again $1399 for the Omni is quite a good price, considering that it includes Kolor Autopano Video Pro 2 and Autopano Giga 4.

Is it a good deal?

Yes I think so — it’s the lowest cost 8K camera at the moment.   Here’s the breakdown of its cost:

Both Autopano Video and Autopano Giga are regarded as among the best in stitching software in their respective categories, and yes they work with other cameras as well.  So the software with the Omni is worth 529 euro (around US$610), which means that you’re getting the GoPro Omni hardware (rig with sync connections + six cameras) for about $789. By contrast, the next cheapest 8k 360 camera I’m aware of is the Brahma 6 Prores rig (8K 24fps), which is GBP899 (around US$1178), NOT including the stitching software (Brahma’s Steve Jones recommends Kolor Autopano Video) and can’t use Omni Importer.

Even in 2018, GoPro Omni’s quality is still considered excellent.  I can’t remember how many times I saw a 360 video and said, wow that looks good.  And then I saw that the camera they used was the Omni.  Here’s a sample (please allow the video to load in its full resolution):

And here’s the camera they used, which appears to be the Omni:

In case you’re wondering, GoPro Omni is noticeably more detailed than Insta360 Pro ($3499), although of course Insta360 Pro is much easier to use both shooting and stitching.

Meanwhile, check out these other videos by Peter, also shot with the GoPro Omni!  For more information on the GoPro Omni, see this post.

To see more of Peter’s amazing work, check him out on Instagram and his YouTube channel here.