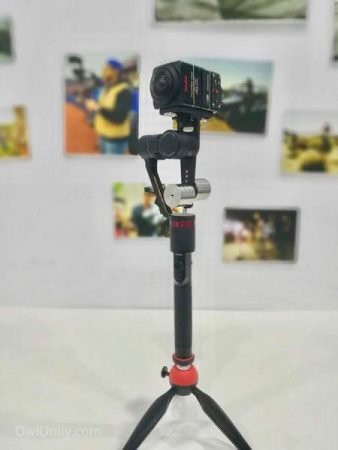 The Guru 360, the first 360 gimbal for consumers (previewed here), now includes an adapter that makes it compatible with the Kodak SP360 4k Dual Pro.  They also posted a video that shows it CAN be used upside down.

360 videos need to have a level horizon in order to keep the viewer comfortable.  One of the most effective ways to keep the horizon level when the camera is moving is by using a 3-axis gimbal.  However, most 3-axis gimbals have motors that block the view of a 360 camera.

The Guru 360 is the first 3-axis gimbal designed for 360 cameras that is affordable for consumers (gimbals such as the .  I had the chance to try a preproduction version that worked very well with 360 cameras such as the Nikon Keymission 360, Samsung Gear 360 and other small 360 cameras.  Check out this sample video (with the Insta360 Nano).

Part of the issue is that the Dual Pro’s tripod adapter raises the SP360 and its center of gravity, making it harder to balance.  The Moza engineers created a new adapter that enables the Kodak SP360 4k Dual Pro to be used with the Guru 360: 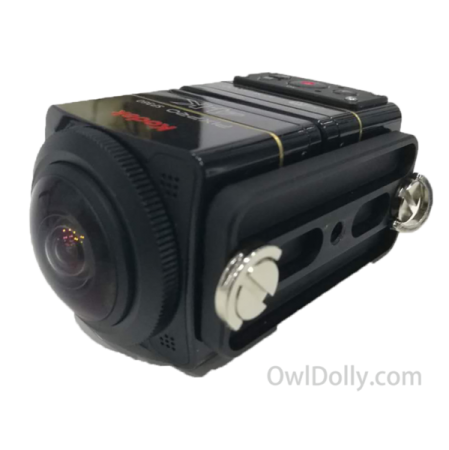 The new adapter for the SP360 4k is included with the Guru 360 at no additional cost.  As you can see, the video also shows that the release version of the Guru 360 *can* be used upside down BUT they are NOT claiming that it can be used with a drone.  It *may* be possible to use it with drones! (although I haven’t tried myself).

I ordered the Guru 360 myself and am looking forward to using it.  The first batch of the Guru 360 is now sold out, but you can still order it for $299 ($50 less than the $349 MSRP).  You can also get an additional $5 discount if you use the code 360rumors which would be a great way to support 360 Rumors at no additional cost to you so I can do more tests and reviews.  Thank you very much.  (Sorry, I misunderstood them.  The discount code is for another product, not the Guru 360.)

Update on Hubblo, the most affordable 3D 360 camera with realtime stitching, plus a video editing contest to win a Hubblo camera!
Out of Air: Insta360 Air now sold out at Amazon! Here’s where to find it
Comment